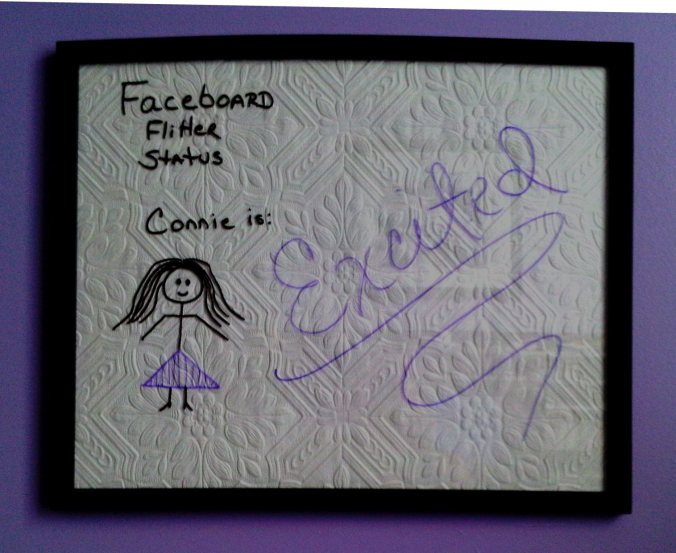 Connie expects to enjoy her vacation.

Photo by TheMarque at Flickr - used under a creative commons license

In my nonexistent spare time, I’m doing some work at an emergency shelter for teenagers.

I must be getting old.

For fourteen years, I worked on a college campus. In addition, I was a teenager (once upon a time) and I raised a teenager. I hadn’t expected to be surprised by these kids.

About every two hours or so, one of them surprises me. Far too frequently, one of them will surprise me to the point of speechlessness. I’m rarely at a loss for words.

In 13 days, I will celebrate the golden jubilee of my existence. I’m rather excited about turning 50 though I can’t quite articulate why. I am discovering the Big 5-0 is a time for reflection. While I don’t feel it’s possible that I’m 10+ years past the age I was convinced my parents were elderly and on the verge of nursing home care, I do know that I’ve got enough years behind me that every now and again true wisdom pops up in my brain – the brain that still feels 25 in the body that’s feeling every year of 50.

Working with teenagers at this junction encourages that reflection and results in some brief glimpses of insight.

I was the teenager from hell. Fortunately or unfortunately, depending on your point of view, I was intelligent and strangely responsible with my delinquent behavior. I had goals and I managed to get through a surprisingly good public school system with a solid 3.92 average. I worked 20-30 hours a week. In my (then) nonexistent spare time, I also partied like it was 1999.

The saving grace was that I loved and respected (kind of) my parents.  I loved them and they loved me.

I told my son there were few things he could do that I hadn’t done; and, unlike my parents, I knew what to look for. While there were days I said to him, in stunned disbelief, “Who raised you?” we managed to get him through those years with minimal trauma.

At this point, I’m probably sounding like a hypocrite.

Those all too brief episodes of wisdom are bearing fruit.

They tried to tell me then and I try to tell them now that they have years and years in front of them, but youth is all too fleeting.

I would love to have the attitude and joy of being a small child again – the wonder at the world and the excitement of discovering it. I wouldn’t be a teenager again for nothing. Folks say they’d love to do it again knowing what they know now. Not me. They’d have to drag me kicking and screaming back to the time of Clearasil.

These kids I spend time with 25 hours a week are a mess. Most of them haven’t willfully done anything I didn’t do. The difference seems to be what has been done to them.  By their own actions and by what’s been done to them, they’re growing up far too fast.

College professors are consistently amazed at the irresponsible and dishonest behavior of their students. They’re further disgusted at the lack of basic skills these kids are coming out of high school with. Some of them put the blame squarely on the kids. Some on the public school system. Some on the parents. Some on all three. Rather than blaming, I’m more interested in figuring out what we’re doing differently with our kids that leads to this behavior and attitude. If we can figure that out, we can stop it before it starts.

In my other job, I work with folks committed to prevention of child maltreatment. The statistics and the research strongly show that it’s far more effective and less expensive to prevent the problems in the first place than to react to them later.

This job offers the flip side. What I see is that we’re dumping tons of money on this problem. Money that needs to be spent. But I wonder about the efficacy of it. It’s a temporary shelter so I don’t get to see what happens in the long term.

What strikes me about these kids in the shelter is how young they are and how old they think they are. The problem lies in that junction. They chafe, in ways I didn’t, at our attempts to control and change their behavior. So many of them have an attitude that this is all there is. Those that do have goals have ones that are shallow and center on the acquisition of stuff or the attainment of fame. They don’t want (or don’t they can) contribute something of real worth. Or they have no concept of what is worthy.

It’s too easy to throw up our arms in despair and declare the problem too big to deal with. There’s an old story that makes the rounds of intervention folks – The Starfish Story. It was written by Loren Eisley. In short, a man on a beach sees miles of beached starfish and encounters another person picking them up and throwing them back into the ocean. The man points out to the other that he can’t possibly make a difference as there are hundreds of starfish and miles of beach. The starfish thrower says, as he tosses one back into the ocean, “”It made a difference for that one.”

My work at this group home is not onerous. Mostly, I sit and talk with the kids. Every now and again, I get the opportunity to say something that I hope is the equivalent of tossing a starfish back into the ocean.

What I need to learn, and this is probably true of life, is that while I will not get to see if my actions provoke positive results, the simple act of doing is still worthwhile. 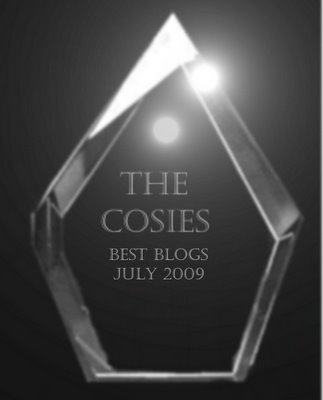 It’s just been a wonderful day from beginning to end. In reverse order, I got a lot done at the office today without ever breaking a sweat; I had a wonderful (for a chain restaurant) piece of mahi mahi accompanied by a delightful salad tossed with watermelon and blueberries; the coffee was made before the water was shut off for construction; and (ta da!) I won a blogging award.

I was just on my way out the door for work when I got the comment from Cosanostradamus at Blog Me No Blogs that I’d won a Cosie. Talk about whistling while you work! Positive recognition is a right fine way to start the day.

I’m tickled with my July 2009 Cosie Award.   The Cosie is awarded to bloggers and each round is a different niche. The category (Alex, I’ll have women bloggers for $500) was the rather bland women, but Cosanostradamus further defined the category as Liberated Ladies, Drama Queens & Hard-Workin’ Women Writers.

I’m further delighted by the name of the organization bestowing the award: The American La Cosa Nostradamus Foundation For The Advancement Of Blog People And Their Blogs or TALCNFFTAOBPATB (seeming pronounced exactly as you would think). Now those of you who know me know I love a good acronym. Isn’t that a wonderful one? Doesn’t it look like something Bill the Cat would say while twirling his tail?

My fellow (girlow?) awardees are an accomplished bunch. I’m most familiar with AKMuckraker (who is a Feisty Grrrrl of the First Order) and as soon as I saw my blog name mentioned with hers, I twirled and preened and was, generally, so full of myself that even I got disgusted. Fortunately, my attack of excessive self-love wore off before I arrived at the office. (There’s nothing like standing in line at the post office to take a person down a peg or two.)

Nonetheless, it kept some zing in my walk and my words today. (Yesterday’s Powerful Communication for Women Seminar Trainer would be puffed up with pride at her teaching skills because my body language and oral communication skills were exemplary.)

So, besides thank you to the incomparable Cosanostradamus (whose blog is a bastion of searing political and social commentary, among other things), I’d like to say to y’all – go out and tell somebody that they’re doing a good job doing what they’re doing. Maybe if we’re all whistling while we work, we can effect world peace. Or buy the world a Coke. Or something like that.

Rescued from the underworld