My First Award - The Bella

BuzzardBilly over at BuzzardBilly: Appalachian Being gave me a Bella Award. Woo Hoo!!!! I came in 16th out of 15 and I couldn’t be more tickled. This is my first award. Yes, it’s true. Citizens of Cyberia have not come flocking to my blog to partake of my wisdom. Incredible, yes, I know. But BB knows a good thing when she sees it. Even if she initially forgot (sniff).

My Faithful Readers, I think, have formed a secret cadre to keep me a secret. I guess that’s okay, if it’s done out of love. Still, I’m getting several, some times many, hits a day from people looking for peignoirs. I’m tellin ya; there’s a fortune to be made in negligees. Or I could just post about negligees exclusively and watch the hit counter go wild. (My stats for May are in the toilet because I’ve been too busy to blog so I have to use the word negligee at least one more time.)

I think I’d rather have a small group of connoisseurs than teeming masses of the great unwashed.  Kind of like an artisan beer, I’m an acquired taste though immediately pleasing to the more sophisticated palate.

I’m supposed to pass the award on to another 15 people (or 16 or 20 – seems the rules are kind of fluid). That’s going to take some studying on.

So. Picture me twirling and preening, clutching my award to my chest, occasionally hollering Tuwanda!  I’ll be passing out awards tomorrow.  (Note:  I am open to bribes.)

–Connie (clearly this thing has gone to my head cuz I haven’t drunk enough of the Michelob yet to explain the rampant ego in this post.   Hopefully folks realize its tongue-in-cheekiness.)

There’s a neglected market out there.

I get a lot of hits involving the search terms peignoir and negligee. Even in this economic climate, women (presumably) want frou frou nightwear.

Those poor lost souls wandering the Internet in search of white peignoir lace and negligee blue sleeves must be really desperate if they’re clicking on something called W. Va. Fur and Root to find it.

Having done the desperation thing in search of the Beloved Bathrobe (the post that is confoozling people’s search engine), I’ve spent some time looking for a peignoir. By no means ratcheted up to desperation status, I would like one. Perhaps those lost searchers sense my sympathetic spirit. Or not. I wish they’d leave a comment. Even a where the hell’s the “black negligee halter”? would tickle me.

We could start a club or a petition.

There really is a dearth of over-the-top-Hollywood-in-chiffon nightwear. If I were an obliging blogger, I would post the links to some vintage clothing sites I’ve found where they might have some luck. It’s probably cruel to post this as it’s just going to entice the poor dears all over again.

Maybe an open thread? Women Who Want Peignoirs and the Men Who Love Them. Naw. I can see that getting out of control soon.

Speaking of which, I did have one search – white control panel negligee – that bothered me. My ideal waft-around-the-house-inappropriately-elegant-40s-glam nightwear couldn’t wouldn’t mustn’t involve control anything.

Any entrepreneurs out there take notes. Most of those searching want white, but blue runs a close second. Black shows up now and again. I’m dithering between white and black, but sometimes think a dark red could be the one. No marabou, fringe, smocking, embroidery (unless a very tasteful fleur de lis or similar motif), no ribbon rosebuds and certainly nothing that involves a matching garter belt. One does not wear a garter belt with a peignoir. That’s just gauche. I want the gown in a silk charmeuse and the robe in something transparent and floaty with minimal ruffles. It goes without saying that I want the damn thing long enough. Hell, I want a train on that robe. (No ermine.) 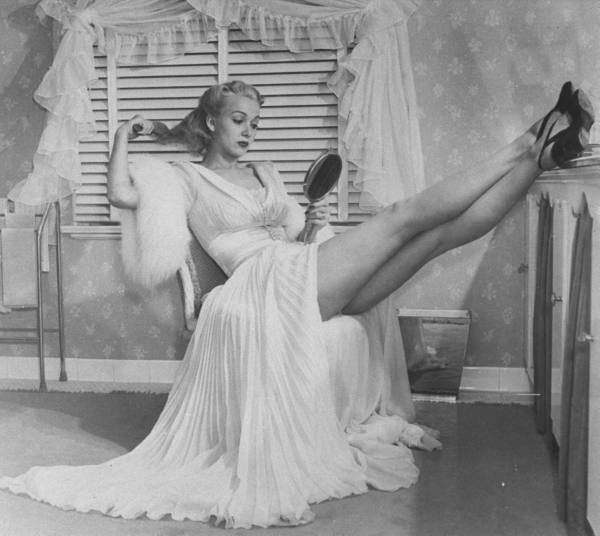 Growing up, I watched an awful lot of movies with women wafting about in peignoirs and other impractical loungewear. I’m particularly fond of some of the nonsense Nora (Myrna Loy) wears in the Thin Man series of movies. (These movies are national treasures.)

I had a peignoir once – for less than 24 hours.

The first year my dad was in Vietnam, my mother pulled out all the stops for Christmas.  As a precocious 7 year-old, I received a frilly, silky, filmy nightgown and matching robe (peignoir) in lavender and purple.  Opening the gift, my jaw dropped at the visual of the fabric nestled amongst tissue paper.  Adding even more wonder and decadence was a small bottle of Evening in Paris eau de toilette – a gorgeous royal blue and gold punch to the white, lavender and purple.

Is it any wonder I’m a diva?