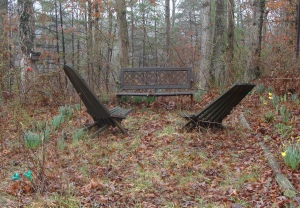 The before picture. (No after photo expected soon.)

All of the cool kids seem to be blogging about their gardens and landscaping plans for this coming growing season and many of them profess to have hideous eyesores of yards wherein Something Must Be Done. Janis has gone so far as to propose a competition for the ugliest before picture. I’ve warned them that I will win hands down.

I suspect they think I’m exaggerating. I’m trying to suppress my shame and summon courage to post a recent photo to be used as a “before” – but besides the horrific embarrassment of such, I’m concerned there will be so little difference between the “before” and “after” shots that I’ll have to move out-of-state to cope with the social snubbing that will surely result if I manage to survive the “before” shot. As I said in a comments section somewhere, I already feel like the geeky girl in off-brand jeans and Payless tennis shoes sitting in the back corner of the cafeteria. While I have often been decidedly uncool, I have never felt particularly uncool. It’s really uncomfortable as well as a conundrum.

I know what to do. I mostly know how to do it. The problem is one of cash flow, time and memories. For years, I ranted about how I never seemed to have money and time at the same time with the implication being I did have one or the other. Right now, I have neither.

I am plotting and planning my 2009 Gardenpalooza, but my methodology is significantly different. There are no seed catalogs, landscaping companies, or brawny men involved. There is me, a wheelbarrow with a flat tire, an aging lawnmower, and a fair amount of determination.

I blame my parents. I was not adequately prepared as a child for the perils of my genetic makeup.

My parents garden. My grandparents gardened. My great-grandparents had a huge commercial farm and apple orchard. I, so I said, couldn’t see the fun of mucking around in the dirt. But genes will tell in the long run. Scientists don’t rightly know what flips genes in the “off” position into the “on” position but they’re grant writing up a storm to figure it out.

I have quite a bit of land in bad need of landscaping. Years ago, when the world was still new, I surveyed the gravel, clay, fallen tree branches, construction debris, and broken lawn mower from my kitchen window.  I decided This Will Not Do.

How hard can it be? (Veteran gardeners will recognize this as famous last words. Poverty-stricken gardeners will cover their eyes in memory of the horror. I’m sorry, but I have a tale to tell. Don’t read if you’re fearful your PTSD will kick in.)

I raked. I threw stuff away. I burned brush. I got a shovel and tried to dig in wet clay.

This, I said, is hard work. 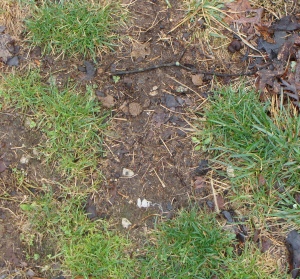 You just can't call this soil. You can't.

My dad ambled up the hill and said, “What are you doing?”

I told him. He scuffed his boot in my clay/grave/bedrock and said, “Good luck.”

I borrowed his wheelbarrow and dumped tons of chopped up leaves (which I did with the lawnmover I had to fix first) to mix with the clay. I bought Rodale’s Organic Gardening. I tossed in bags of lime.

Even I could tell nothing was going to grow in that mess.

The husband asked what I wanted for Mother’s Day. I told him I wanted a load of topsoil.

Do y’all have any idea how much dirt there is in 10 tons of topsoil? Do you also know that you will win Mother of the Year if you have a small child and you have 10 tons of topsoil dumped in a heap in your yard? I had urchins in towel capes scrambling up and down the mountain of dirt playing King of the Hill. I lost Mother of the Year when it dawned on Chef Boy ‘R Mine the hill was disappearing for “mama’s flowers”.

One wheelbarrow at a time, I moved that dirt – by myself. The ex made it clear this was my stupid idea and not his which was kind of fair. I didn’t help him with his stupid ideas either.

Being A Poor Person of Considerable Financial Plight, we popped our wad on topsoil so there wasn’t any money for landscape timbers and whatnot. So I dragged deadfall small trees out of the woods to use in lieu. After the grueling work of leveling a 30x 50 plot, I returned to mixing in the chopped leaves. I read some books and talked to the County Extension Agent and realized this still wasn’t going to do.

I heard through the grapevine about a horse farm that would give me all the manure I wanted, but I had to go get it. I borrowed Dad’s truck and went to the farm with a shovel. (The wreck on the way is another story that I may or may not recount at a later date.)

Do you have any idea how much crap you can put in the bed of a full sized pick up? A lot.

I dug in manure and leaves.

Finally, well past planting time, I was ready to go.

I stood out there one morning, exhausted and poor, and scattered zinnia seeds I’d found priced at 10 packages for a buck with an expiration date years gone by. I also tossed in some grass seed in the middle of the plot.

In spite of all this work, I still had a plot of garden space that was not plant friendly. The guy who originally built this place did so after blasting the top of the hill, trucking in tons of gravel so he could park semitrucks up here. I sit on bedrock. What little soil formation that occurred during normal geologic processes was compacted by big rigs. At most, I had provided any future plants a total of 6 inches for root development.

Those zinnias germinated and grew and bloomed their fool heads off. So did the grass. I had never been so awed by the miracle of life since my son’s birth in 1985. I remember standing at the kitchen window that started it all gaping in astonishment at the riot of color made even more colorful by a misty rain and clouds settled into the holler. I about died of the beauty.

The mania was on. 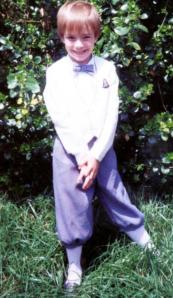 Over the years, I dug and worked, poor for most of it, on the kitchen garden – developing it into a not unimpressive (though not worthy of Southern Living) cottage garden. It was my meditation, my exercise, my hobby, my stress relief, my what-do-you-do-for-fun answer. I clocked hours in the garden. Eventually, lawn furniture appeared and the entire family lost hours sitting there for morning coffee or sitting there at dusk with a cold beer and blues wafting from the stereo through that same kitchen window. As the garden became Truly A Thing Of Beauty, we spent more time in the garden than we did in the house.

For a lot of reasons, too complicated to explain, the kitchen garden has gone wild. In the period that I had money, but no time I would frown a lot when I stood at the window. The past few years, I’ve attempted to tame it, but the wild raspberry and wild rose that have invaded it have teamed up with poison ivy to make working in it a Bad Thing.

I am resolved that this year, even if I end up in the ER with severe thorn wounds and poison ivy, I will reclaim the garden. I will do so if I have to do it by flashlight. It’s not going to be easy or even mildly difficult. It’s going to be a righteous bitch. A sane person would burn it and start over. But it’s an heirloom garden so to speak – my great-grandmother’s irises are in there as are my best friend’s daylilies. My mom and I dug the irises out of Mother’s garden the day we took her to the nursing home. I dug the daylilies out of my best friend’s garden the day we buried her.

The roses were gifts. The creeping juniper came from a friend and my son and I dug the dogwood out of the forest one unseasonably cold fall day. My grocery store clerk gave me some stuff as did my drycleaner. Students at the university brought in “extra plants” from their parents’ gardens. I can’t remember what year it was, but I planted 100s of daffodils that multiplied until they were so crowded they didn’t bloom well.

So. I can’t just burn it to ground level and start over. Garden reclamation is going to be ugly. Expect whining.

While I’m doing that, I also have the patio garden to finish. It was the same bedrock mess. I’ve got one small area that still needs topsoil. I’m hoping to put vegetables in there. Or at least tomatoes. And the garlic – an ex-boss of mine gave me some heirloom garlic that her neighbors’ great-grandmother brought from Italy when they immigrated here. I’m told it’s the best garlic on the planet. Besides finishing the patio garden, I may have to re-do a lot of it. Annie, the rescue Labrador retriever, had a severe psychosis about plants and wreaked her havoc during drought. Coupled with that, this winter has been very harsh. I suspect I’ve lost most of the plantings I’ve put in the past 3 years. I will be very sad. I actually spent big money on some of this stuff.

I am now, once again, a Poverty Stricken Person, so all of this has to be done very cheap. Expect not just whining, but Major Whining.