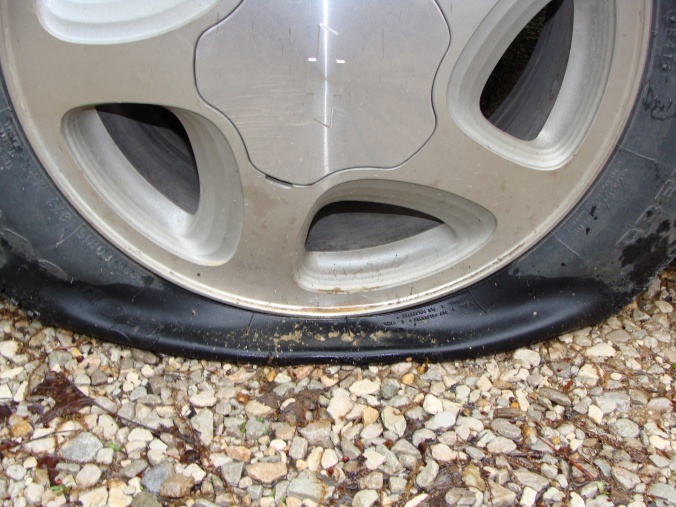 I’m thinking that maybe if I have a major, no-holds-barred, massive whine fest, I can find one more hand-hold on the cement block wall that is my life these days and, um, get-a-grip.

But in any case, I’m going to rant and rave and more than likely delete 90% of it before rock-and-rolling through this house like the avenging angel of housecleaning. OK, I’m going to commence cleaning after I finish this and after I deal with the flat tire.

It’s always been true that when my life is at its most chaotic, I slow boil on the sofa for a day or two and then get up and do something not particularly helpful to the crisis at hand – something like putting new shelf paper in the pantry or alphabetizing the spices. There’s a peace of sorts in doing something that creates a sense of order, no matter how trivial, but also does no harm. There’s not anything I can do to stop the onslaught of chaos, but I can put clean sheets on the bed. I can wreak genocide on dust bunnies. I can clean out the junk drawer. It’s live-action metaphor that will make me feel empowered to effect some sort of change.

But really. I can’t take one more damn thing.

Way back when, in another geologic era of my life, I was sitting in a doctor’s office waiting for my appointment and perusing a months-out-of-date copy of Redbook. In the issue was a stress test which I decided to take as it was now well past my appointment and my stress levels were rising as I considered all the things I wasn’t getting done while I waited.

The only questions I didn’t get the maximum points on were the death of a loved one, bankruptcy, legal problems, and life-threatening illness. When I tallied my points, I was in the category of “honey, give it up, do not pass go, do not collect $200, just check into the nearest asylum and get fitted for a straight jacket.”

In retrospect, those were the good old days.

And yet, every time I utter those words, one more damn thing happens. Some of it is my failure to adequately plan and/or putting my faith and trust in the wrong people. Some of it had nothing to do with me, but affects me nonetheless, and a great deal of it is in the nibbled to death by ducks category.

The past couple of years have been horrific. Really. I can’t take one more damn thing.

Nibbled to death by ducks is an expression I was introduced to about ten years ago. I think it’s British, though I’m not sure. As I understand it, it’s that state of stress brought on by a series – a series that feels eternal –  of minor catastrophes and inconveniences that goes on and on and on. And on. Endlessly on. Pointless, meandering, irritating. Like this paragraph.

I think my life shows that I can handle the big stuff – the really catastrophic oh-my-God shit. While I’d like to do it with more grace and style than I do, I do, some how, time and again, seem to get through it with my sense of humor intact.

To be fair to myself (although it could just be that I’m too stressed to see the trees for the forest), I seem to have more than my share of big stuff. I’ve quit trying to find some meaning in that. OK, mostly quit. These days when I do find myself veering in that direction, I’m most often reminded of the biblical book of Job. If you know your Bible, you know that Job didn’t do a damn thing to deserve any of the stuff inflicted on him – it was all some bizarre pissing contest between Jehovah and Lucifer. Job reacted in such a way that Jehovah won the bet and thus was rewarded in the end.

Now I’m not nearly as blameless as Job and I’m not about to thank Jehovah or any other idea of god for the endless shit that keeps whirling about me. It’s my fervent belief that if there is a sentient creator, he/she/it is not so petty. All this crap is not going to result in a reward in the afterlife or make me a better person or build character.  If that were true, I’d be the second-coming of Mother Teresa already.

Right now, I’m working feverishly to keep my sense of humor. (It’s not for nothing that the Dalai Lama is a fan of the Three Stooges.)  For the first time ever, I really do feel like I’m in danger of losing it. To not be able to laugh is my vision of hell. That’s rock bottom – the point of no return. I think we all have one and yours might be something different, but mine is the ability to laugh. I’m the person who usually doesn’t need a couple of years to find the humor in some catastrophe – those “someday we’ll laugh about this” events. I’m usually the one, often inappropriately, laughing in the middle of it.

The irony of the flat tire I was greeted with yesterday is so in-your-face that if I read it in a piece of fiction, I would roll my eyes at the heavy-handedness of the writer. Yet, it wasn’t until just an hour or so ago that I realized the dark humor of it. I still haven’t had the belly-laugh-until-you-cry moment, but hopefully it’s on the horizon. It is pretty damn funny when you think about it.

No. I’m not going to explain the irony of the tire. It would take too long and require even more whining. But, trust me. It’s pretty funny and I will laugh about it. I will. Even if I have to fake it.

Afterword:  Self-reliant tire-ing is not going well. The rain isn’t helping.  And I’ve yet to begin cleaning which will, perversely, make me feel better even though I hate cleaning with every fiber of my being.