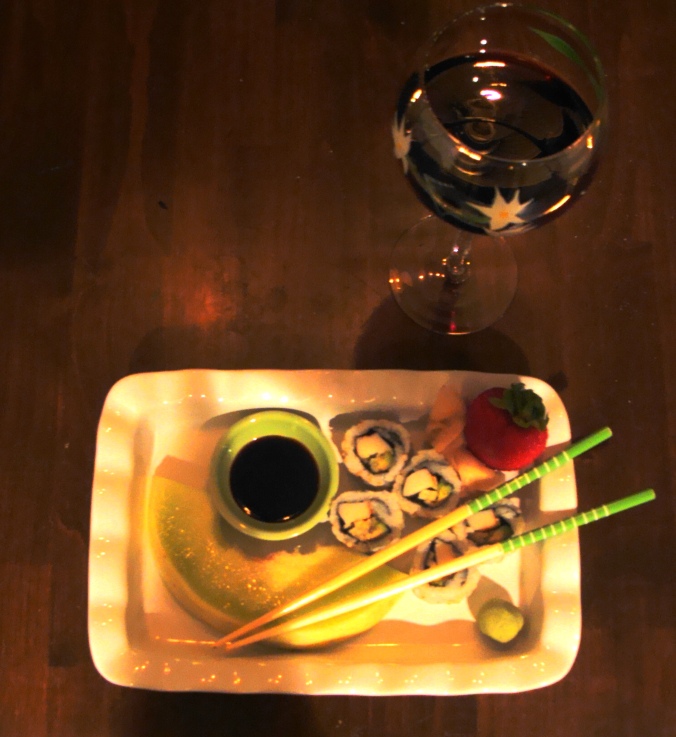 This time of year, I’m too busy in the garden after work to think much about food (or laundry or housecleaning or bill paying or much of anything). When the sun starts slipping, I settle into the lawn chair with a glass of something and ponder the universe until the solar lights come on.

It’s about then that it occurs to me that I’m hungry.

My childhood was punctuated by late summer suppers. I inherited the after-work gardening gene from the folks. We ate late from about March to October. Daylight hours were spent outside.

In 1973, my father went through a spell where he was determined to perfect his spaghetti sauce – we all thought it was already perfect, but he wasn’t satisfied. We had spaghetti every twelve minutes or so. Fortunately, we liked spaghetti.

Daddy did this and Daddy did that – the sauce got better and better. But it also got later and later. As a starving teenager, by the time plates were set on the table, I was ready to chew on the formica.

That spaghetti – hot summer day cooling into a nice evening, sweat drying, ice tea glasses dripping, and the mosquito coil sending up spirals of smoke – digging into a steaming plate of perfect, tangy pasta with even better garlic bread – Lord, it was good.

The fullness of a heavy pasta and the exhaustion of an active day, the contentment of a good meal when ravenous – all of it engendered a sense of well-being that no psychotropic drug can mimic.

Today was hot. I’m making a point of trying to remember to eat, so on the way home from work, I stopped at the Kroger for something light. I ended up with California roll sushi, melon, strawberries, and Merlot. I also procured my father’s birthday cake – in this case, cheesecake. I ate dessert first (by several hours) and just now finished dinner.

We’ve all read that slogan – eat dessert first! I never do. But tonight? Tonight, I did. It’s a fine way to ingest the daily calories.

As I sit here thinking about 1973 and the following years, I’m awash in memories of all the late summer suppers I’ve had – at tables, on decks, at campsites, in restaurants. The joy of eating seems maximized in the summer – vegetables and fruits are fresh, the iced tea is cold, and, after the sun goes down, coffee is a miracle.

A few years ago, there was the naked lobster dinner. Last year, there was the rooftop North African dinner. Two weeks ago, there was the steak dinner (with art) on the deck.  I’ve had roasted venison by campfire, grilled trout by candlelight, and hamburgers under a yellow, bug light.  Dessert has been s’mores, cheesecake, a mango, and, on one memorable occasion, banana splits sitting on the side of a hill watching interstate traffic outside of Morgantown.

Tell me about yours.