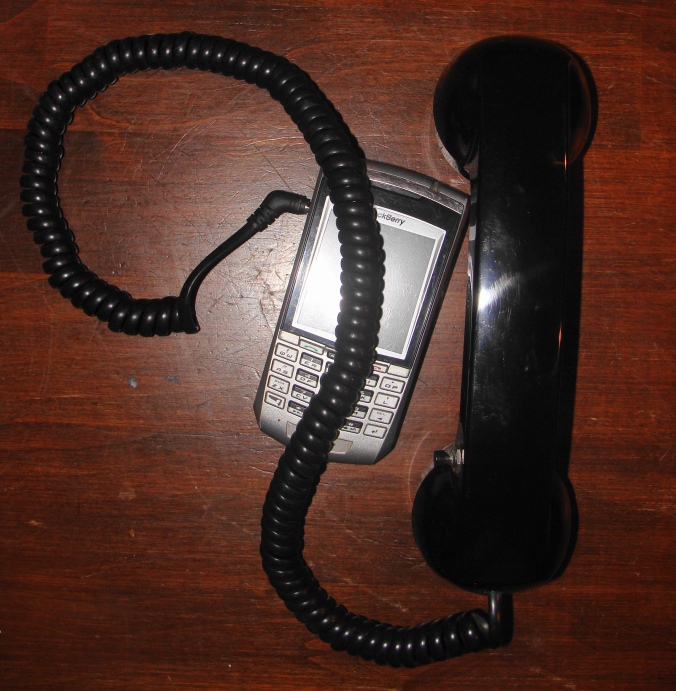 Back about 2001 or so, my family got their panties in a tangle when they discovered I was traveling the state and eastern seaboard without a cell phone. Now, I’d traveled years and years before the advent of cell phones, but suddenly it was a problem.

Now they had some good arguments: the one that swayed me was the fact that pay phones are an endangered specie. I also was tired of explaining that I was the last person on the planet without a cell phone.  So. I got a spiffy little prepaid cell phone with which I was happy But then people started calling me all the time and no amount of YOU CAN’T BELIEVE WHAT THIS CALL IS COSTING ME got through to them. At 50 cents a minute, I couldn’t afford the convenience.

By then I was convinced of the need for the damn thing. I wandered into an AT&T store and came out with an NEC phone that rocked my world. It was simple and didn’t try to make toast, take pictures, play music, or iron my sheets. It made calls and it had a great calendar that synced nicely with my Outlook contact list. For $29.99 a month even my chattiest friends could call me without me gritting my teeth.

Then I discovered that people think that because you have a phone you should answer it unless on life support or in a job interview. I continue to be astounded that people fail to realize that the phone is for my convenience and I answer it dependent on personal whims. That’s not ever going to change. My first full-time job was as a switchboard operator and I’ve had a love/hate relationship with phones ever since. I once lived for 3 years without a phone to try and get over the trauma of those early employment years – 42 ringing lines, 8 hours a day, all day, 5 days a week, and two Saturdays a month.

In any event, I went days without turning the cell phone on. You can’t imagine (or maybe you can) how that enrages people. Then there’s my mother who hollers “pick up, pick up” into my voice mail. Now granted, she only calls me when things are dire, but I’ve yet to get her to understand that voicemail is not an answering machine. (Her confusion is understandable – at home I have an answering machine, I screen all calls and I don’t “pick up” most of them.)

Well, just as I was getting to be dependent on the cell phone, AT&T sold to Cingular and my phone, coinkydink, didn’t work half the time and no amount of talking to customer service did any good. Enraged and in full tantrum mode one day, I went to the Cingular store prepared to have a meltdown. Fortunately, one of the kids I knew from the university was working. After a calm, reasoned explanation of my wrath, I was given a new phone at no charge.

Turns out it was the Motorola Razr. I had no idea that it was the trendy phone of the moment and younguns everywhere were saving their money to get one. I hated it. I do not want to hold my tongue just right, hit the right center side of a microscopic button, and say 12 hail mary-ies just to get my address book to open. I don’t know why anyone would.

I also do not want my cell phone to be smaller than my lipstick tube. I want to be able to find it in my purse. I do not want it to be thinner than a credit card. In fact, I’d like a cell phone the size of a cordless phone handset. That would make me very happy. In fact, I railed for some time about how I’d like a cell phone that was tucked inside of an old fashioned black receiver – big honking, heavy thing. [Note: they don’t make those, but they do make a nifty “earphone” thinger – see the picture.]

Less than 24 hours later, I took the Razr back. My cute little university boy wasn’t there. I had to have a meltdown.

I walked out with a Blackberry. It was the first “smaller” version of the classic Blackberry. It didn’t have the QWERTY keyboard, but it was 4 times the size of the Razr.

Man, I loved that phone. It was simple, direct, synched with my Outlook and had dedicated buttons for features and a nifty track wheel conveniently located on the side. After a couple of months, it occurred to me that I wasn’t using the data capabilities and it was stupid to pay for it. I cancelled the data plan. I also cancelled the text message plan.

I didn’t understand until recently why having a Blackberry with no data plan confused people. Apparently, I was the last person to be allowed to do that. Now, if you want a Blackberry you have to pay the additional data fee.

Well, Cingular sold everything back to AT&T and regular as clockwork my phone became unreliable. It’s also very old. As my use of it dwindled, I decided paying for 450 minutes a month when I was using 20 was kind of silly. So, I converted the Blackberry to a Go-Phone account.

After years of railing about the evils of cell phones, addiction to the little monsters, etc. etc. to wit and tut tut, I found I missed knowing that I could call anyone anytime without fear of being out of minutes or talking too fast because of the 25 cents a minute thing.

And after years of railing about multifunctional phones that do everything besides connecting one voice to another, I found myself wanting the Blackberry 8900 because of its camera.

Cameras, specifically, were the target of my ire. I said often and loudly, “I do not want my phone to take pictures.” I also said, “I don’t want it to play music. I don’t wanna surf the web on my phone. I just want to make a phone call.”

I thought this pining for the 8900 was temporary insanity and would wear off once my hormones stabilized. But then a friend got one. And then my son got one. My eyes narrowed into green, blazing slits of uncontrolled coveting.

Given my hatred of phone dependence and previous railing of phones that do everything, I cannot justify this.

But here’s an attempt:

So. I’m cruising the Amazon site for birthday presents and there was the come-on deal – no activation fee, no shipping charges, and the 8900 for one penny. ONE CENT. ONE.

The thing finally arrived today. There are some things I’m not happy about, but I’m hoping it’s just a learning curve glitch and it’ll be second nature in no time.

But wouldn’t you know it – it’s cloudy and a little drizzly outside and I can’t get a signal. Cell phone reception in the barn is always hit and miss, but dammit, I got a new phone. I’ve got the data package. I’ve got texting minutes.

Fortunately, I’ve got wi-fi, so I did get to test that out. I’m hopeful that tomorrow I can explore my new phone and learn all its secrets and take a million pictures of people from the front seat of my car.

So. If you want to send me a text message, email me and I’ll give you my number.

I’m tickled with a phone that at the moment is incapable of making a phone call. Go figure. It’s a big ol’ goofy world and I’m the leading lady.  Happy (early) Birthday to me!

[Note: The spiffy old-fashioned phone receiver thingie doesn’t fit in the new Blackberry – I’m going to have to find an adaptor – bet that ain’t gonna be easy.]