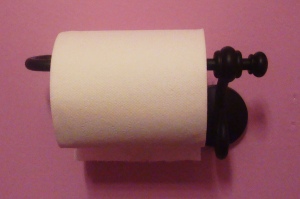 If I were going to channel the writers of Sex in the City, I might begin this post with “Can a toilet paper holder make a woman happy?”

I finally got around to painting the guest bathroom. Trust me, it needed paint like my 401K needs funding. Whilst buying the paint, I picked up the toilet paper holder of my dreams – black wrought iron and cleverly designed so that toilet paper can be installed without disassembling the holder.

I am challenged when it comes to inserting toilet paper in the standard type of holder. I become all fumble-fingers and end up hopping around the bathroom with my jeans around my ankles trying to pick up the middle rod. It’s always an Abbot & Costello moment not that I think those boys ever changed the toilet paper roll.

[I’m generally opposed to jokes that bash gender, race or ethnicity, but I absolutely love this one: How many men does it take to change a toilet paper roll? Nobody knows. It’s never been done. OK. Got that out of my system.]

I’m two-for-two on recent paint jobs. After the disasters of recent years, this is heady stuff. The lavender office and now the cow bathroom have been freshly painted with the color being right the first time. Right and fabulous.

Back when black and white cow motifs were all the rage, I made the mistake of saying (out loud) that I thought they were cute. I’m not generally a “cute” person, but I live in a barn. I like black. And I do, now and again, enjoy a touch of whimsy which explains why Miss Piggy lives on my desk in my oh-so-elegant lavender office. It also explains the cow bathroom.

Since I had declared the cuteness of black and white cow stuff out loud in front of God and everybody, my entire extended family gave me such stuff for every gift-giving occasion. It got entirely out of hand. By the time I shrieked, “Enough already, people,” I had cow dishes, posters, photos, cards, plant holders, door stops, stuffed animals, coffee mugs, sweatshirts, socks, salt & pepper shakers, cleverly designed lotion dispensers, Christmas ornaments, soap, stools, canisters, soup tureens, cookie jars, and, I’m not kidding, perfume.

Surreptitiously, I had been getting rid of the nastier stuff as the years rolled by. A few years ago, I got rid of 90% of it. During the cow purge, I discovered that I like cow images. I saved those. I also saved the 4,327,643.5 greeting cards bearing cows that I received along with the cow gifts. I also cut out and saved particularly amusing cow cartoons. (No, really, they do exist – Far Side, for example.)

Over the past ten years or so, I’ve been putting some of these things in frames. I actually hung some of them, but most of them were languishing in a box pending painting.

While recovering from what was probably swine flu, I woke up with a powerful urge to finally paint the bathroom I’ve been trying to paint since 1998. I decided, after ten years of pondering, that cow udder pink would be just peachy – although I wanted a cow udder pink that veered towards orchid rather than peach.

I skipped-to-my-lou’d over to the Lowes and picked out paint in less than 5 minutes which left me plenty of time to snag the black wrought iron toilet paper roll holder. It was a good day. Those of you who know me know how out of character that is. It took me 3 hours in the paint aisle once to choose a white paint. There’s something to be said for buying paint in the wet-noodly-stage of flu recovery.

It was even better when the molding came off without cracking. Spackling went enormously well. Primer was easy-peasy. Paint went on like a dream AND the painter’s tape didn’t pull off the edges of the new paint when I pulled it off the wall. Really, it was like someone else painted the bathroom. (Of course, there’s paint in places there shouldn’t be and I’ll eventually get around to fixing that.) 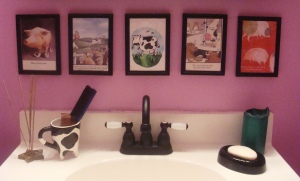 After all that, I painted the vanity and medicine cabinet, spray painted some stuff black and begun the onerous task of hanging stuff on the walls.

One wall has always borne three of Jennifer O’Meara’s “American Barns” prints. I love these things and I could flay myself for not having bought more when they were on the market – they weren’t particularly costly. My goal was to complete that wall with a ton of barn images and cow images and touches of whimsy as well as the other three walls. I have two thick file folders of images suitable for framing (some blatantly stolen from Flickr).

People in bifocals with a significant astigmatism find lining up photographs and prints on a wall to be challenging. I got about half of it done when I ran out of frames (and energy). 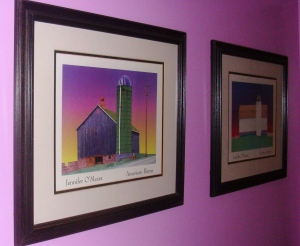 My to-do list now includes the purchase of more frames (from Dollar General and similar fine framing establishments). I also must deal with the ceiling and the floor, but significant progress has been made.

And so? Can a toilet paper roll holder make this woman happy? Well, no, not in and of itself. But I’m tickled cow udder pink with the progress of the bathroom. If memory serves, I think pink is one of those colors that is said to provoke a feeling of happiness. And then there are the simple conveniences like being able to put toilet paper on the holder one-handed that do make me smile. But I’m especially happy that it’s all gone so well.

[And, in other news, I’ve replaced my stolen camera with an exact replica! In fact, for all I know, it could be my stolen camera. I mean do we really know? Is E-Bay just a giant fencing site?]