Finish up with a little something sweet.

I had a dancing buddy that actually did. One of the very first times we went out, he ordered dessert in lieu of an appetizer. I believe it was chocolate mousse.  [He’s an interesting guy.  I should call him – we haven’t been dancing in forever.]

While I often say that I don’t feel (intellectually or emotionally or spiritually – my body is another matter) older than I did at 25, I am much more aware of the passing of time. Even at 25, there seemed to be eons between Christmas seasons. Now? It feels like last week. Hell, it feels like last week that I was 25.

The other day I had a powerful urge for coconut cream pie. The nearest place was the Bob Evans. Chez Bob’s for dessert always creates a dilemma. I like their French silk pie as much as I do their coconut cream. As I walked over, I made the bold decision to skip lunch altogether and have both. 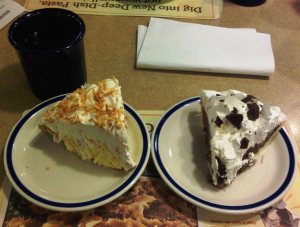 AND is my favorite word.

My love affair with coconut cream pie began in January of 1970. I’d never had it before. En route via luxury ocean liner from Hawaii to California during one of our many relocations, we were assigned a table, dining times, and a waiter.

Dean, the waiter, quickly bonded with my brother and I. My mother was horribly seasick and my father didn’t do breakfast and my 10-year-old self and my 7-year-old brother would arrive for breakfast and lunch often alone. In 1970 it was believed to be safe for children to run around unattended. 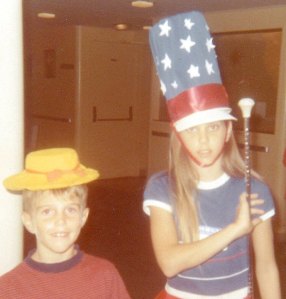 Brother and I before the ship's hat contest.

I think Dean enjoyed us. If memory serves, he was about 25. One evening early in the cruise before Mom succumbed to violent seasickness, Dean suggested coconut cream pie for dessert following dinner. My father encouraged me to try it.

Oh my. It was, hands down, the best thing I’d ever put in my mouth. From then on, I had coconut cream pie at breakfast, at lunch, at dinner and at various times during the day when I wandered into the dining room. It got so that Dean had the pie waiting for me lest they run out before our seating. I ate my Twiggy-style bodyweight in coconut cream pie during that cruise. 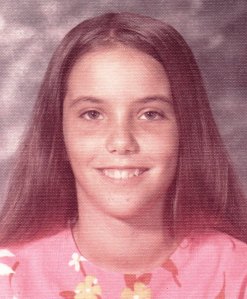 Voracious reader, even then, and newly minted pie connoisseur.

At our last meal, Dean presented me with an entire pie, carefully wrapped in a pastry box and tied with a ribbon. He knew from our conversations that we were looking at a 3000 mile cross-country drive and figured I’d enjoy some pie.

[In Texas, some guy took a look at the Hawaii license plates and asked my Dad how we got that car over. My dad looked him in the eye and said, “That’s the longest bridge you’ve ever seen.]

I have fond memories of nibbling at that pie late one night as we navigated St. Louis in a snow storm, my head poked into Pippi Longstocking by flashlight.

I made that pie last for miles.

I’ve adored coconut cream pie ever since. I am also uncommonly fond of French silk pie (and mousse, for that matter) all of which is pretty odd, because I’m not generally a dessert person – two pieces at Bob Evans not withstanding.   Ordinarily, I’d much rather burn those calories on appetizers. [Some day I’ll tell the Greenbriar story and my “free” meal.] 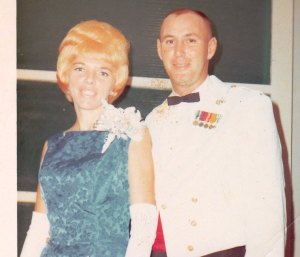 The oh-so-chic parents for the Marine Corps Ball.

After St. Louis and various other locales along Rt. 66, we finally ended up in northern Michigan at the paternal grandmother’s house. It had been so long since I’d seen her that I had no memory of her. Essentially, I was meeting her for the first time. My dad, unbelievably, had not told her we were coming, preferring to surprise her.

My my, was she surprised.

And, my oh my, is Michigan ever cold in January – particularly after the tropics.

Emma was a baker. In fact, she was the pastry chef at what passed for that area’s haute cuisine restaurant – not that they ever gave her such a title, officially. The restaurant was famous for their chocolate bottom pie and nobody could make it as well as Emma. 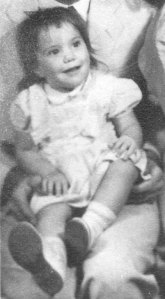 Life's Short - trust me on this.

In violation of the rules regarding the secret recipe, Emma made it for holidays and whatnot. A widow and subsequent divorcee with 8 kids, it was common knowledge she’d never be able to afford to take the kids to the restaurant. I doubt she ever made much more than minimum wage. I think she felt entitled to take that recipe home.

But she never gave the recipe out.

Chocolate bottom pie is a confection of luscious vanilla cream filling, chocolate, nuts, flaky pie crust and whipped cream. The sum is much, much more than the total of its parts. It’s actually very simple to make.  It toppled, quickly, coconut cream pie’s short-lived status as the best thing I ever put in my mouth.

Emma would allow you to watch her make it, forbid you to let anyone else see, and thus the recipe wanders through the family. My mother makes a down-and-dirty version utilizing boxed pudding and still it’s fabulous. Between Dean’s coconut cream pie and Emma’s chocolate bottom, how I vowed to learn to bake. All of her baked goods were exquisite, but it’s the pie I remember most.

It took me years, but I can churn out a chocolate bottom pie that will make you weep tears of chocolate joy. 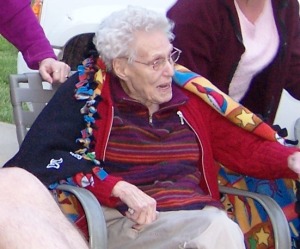 Emma was a wonderful woman. A sturdy woman. A resilient woman. Without any help, she raised those kids in abject poverty while working in an upscale restaurant for minimum wage – the restaurant she made famous with her pies ,the restaurant she couldn’t afford to take her kids to.

Emma was not the sweet grandmotherly type. She was tough as nails. She had to be. But her laugh was something to experience as was her ire. Her cooking – her cooking was sweet. She is the end of an era.

She loved her children and they loved her.  Three of her children preceded her in death.  The remaining five still love her with a passion.

Tomorrow is going to be hard.

We’re glad she didn’t suffer long. And we’re glad to have had her as long as we did.

Tomorrow brings another, much shorter, cross-country trip to Michigan. I think it’s going to be difficult for my parents.  Emma was a icon for both of them. I’m going as much for them as to say goodbye.  More than likely, like my 10-year-old self, I’ll be stuck in the backseat with no coconut cream and, certainly not, chocolate bottom pie.  But there will be a great many memories and good conversation.

And, no, I don’t give out the recipe for chocolate bottom pie.

I promised Emma, I wouldn’t.