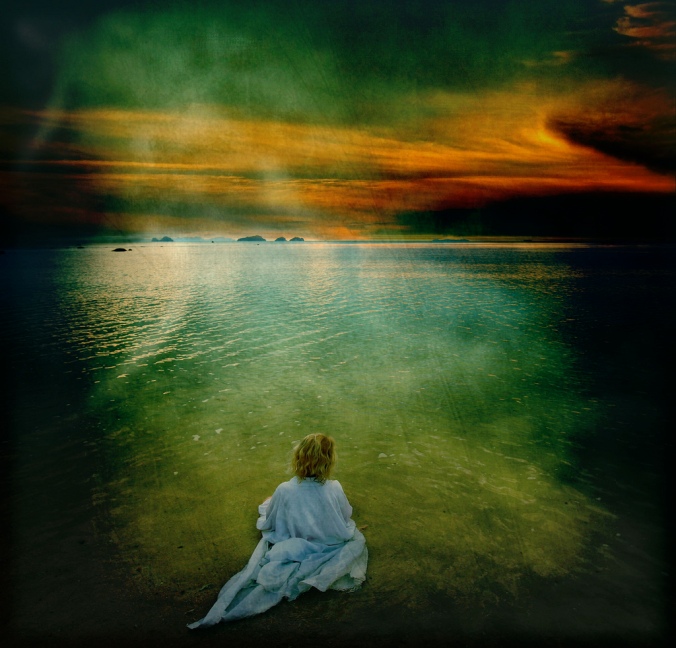 I did a search on Flickr using the term imagine – I was delighted to find the very kind of image I set out to find on the very first screen of results. It’s a good day to be me.

I wanted an image that was a little edgy – one’s imagination can be a fearful place as well as a hopeful place. It’s most powerful when those two mix – hope rising out of fear.

One of our features as Homo sapiens sapiens is that we possess the ability to think beyond the here and now – to both hope and fear, for these are components of imagination. We can see possibilities. We can anticipate barriers.

Most of us lead comfortable little lives only barely tinged with the quiet desperation of Thoreau’s imagination. We go through rough spells. Some of us will throw up our hands and say, “I can’t do this.” But we can. We do.

Our lives sometimes feel like an endless stream of I-can’t-do-these-things-I’m-doing. Perhaps that’s the core of Thoreau – the desperation of self-imposed limits.

What-if is often seen as a brain-storming, motivational force. My what-ifs are worst case scenarios. I don’t think I’m a fearful person, but then again, I’ve had a right awful couple of years. There’s that old chestnut about 99% of what we fear never happens. If that’s an accurate statistic, my 1% has been powerful enough to cause lengthy analyses of dark what-if scenarios before I can move forward.

I discovered I was stronger than I thought I was. I’ve moved forward when I didn’t think I could even stand.

Still, I wasn’t impressed with myself.

I’ve whispered I-can’t-do-this and I’ve shouted I-CAN’T-DO-THIS. But I did it and I’ll do it. The doing can be worrisome, terrifying, humbling. It can also be strengthening. A large part of the downside is the fear of what will people think.  That fear is that we’ll be alone.

Another salient feature of Homo sapiens sapiens is that we’re pack animals. We need one another at the primal level. And yet we pride ourselves on our independence. We’re quirky creatures.

Pride is not an integral part of dignity. Dignity is imbued by the creator, pride is manmade. Pride can be squashed, but a loss of dignity is self-imposed. Independence is a chimera; and quirkiness, well, quirky is dignity in faded jeans and a clever t-shirt.

I’m not that strong. Every I-can’t-do-this that I’ve done has relied on help from someone. It’s always easier to accept help when you haven’t asked for it, but the I-can’t-do-this when the this is asking for help is a lie too. I can do this. I can ask for help. I’ve proved it.  And when I’ve been asked for help, I’ve always been happy to.  We’re pack animals, we’re cooperative – we’ve had to be to survive.