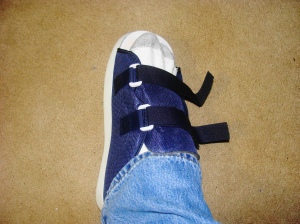 Talk about your silly shoe season.

The last couple of months have just been crazy. Oh sure, I can hear you saying, So what else is new?” It’s true that my life is a tragicomedy that would provide good ratings to some television channel should they decide I’m worthy of a reality show. But I’m opposed to reality TV. In fact, after living without for a couple of years, I’m pretty much opposed to the boob tube, in general.

A few years ago, I developed a soft tissue mass” following a car accident. (Got my feet tangled up in the pedals.) The more precise term is inclusion cyst. As near as I can figure, this damn thing is a giant zit trapped deep in my foot resulting from skin cells that got trapped in joint fluid. Parts of one’s body is allergic to skin cells in the wrong place.  Go figure.

A couple of days after the accident, my foot started screaming in pain – loud enough to deafen the caterwauling of my back and hip. I trundled off to the emergency room where they first told me it was broken and then that it wasn’t. After rounds of doctors and weeks of pain, I finally got the correct diagnosis.

My surgeon, who can’t possibly be old enough to slice and dice people, assured me that it was a simple outpatient procedure that would fix me up for good. He was astonished when I walked into his office a few weeks after the first surgery with another good sized lump in the same place. He muttered something like, “In all my years, I’ve never seen one of these come back.” [All what years? He can’t be more than 16.]

No yoga for me.

So, he sliced and diced again. A couple of months later, I limped back into his office and told him I thought the damn thing was back. He looked horror stricken. He did this and he did that (I think the term is palpitated) and determined it was just a lot of scar tissue. He shot me full of steroids and sent me on my merry way. My foot felt fine for a week or so.

Determined to quit nagging the youngun’, I learned to accommodate a foot that always hurt. A few months ago, the pain started ramping up.

I was far too busy for such inconveniences.

Then the lump got big enough that I couldn’t sleep in my preferred position.

Well. When you start messing with my sleep, I get serious.

I hobbled back into his office. Suddenly, his story has changed. From inconceivable (I don’t think that word means what you think it means – name that reference), he now tells me these things can be lifelong nuisances. So we scheduled surgery.

Loratab and lounging - hey, they said to elevate it. So I am. With all the style and grace I can muster. I am I am.

In terms of surgery, this procedure is a No Big Deal. In-and-out outpatient, a few days whacked out on controlled substances, and a sexy shoe for a couple of weeks. That’s how they describe it.

The pain is significant. Walking around in the damn surgical shoe makes my back unhappy. Trying to negotiate life living alone while under the influence of pain pills is daunting.

And, of course, the timing couldn’t be worse. (HMOKeefe is acting up again.) I couldn’t put the surgery off because I had reached the distressing point where the lump was pressing on nerves – apropos of nothing, my foot would go to sleep – while driving, while walking, while negotiating stairs. It also hurt like hell. The lump also got big enough that finding a shoe that would fit on my foot turned into a search for the lost grail. There’s also the monetary consideration of having to start the HUGE DEDUCTIBLE all over again in January.  (Health care reform, anyone?)

While I have time for sinfully long, baths, it's not all I could hope for.

So instead of preparing for the holidays and nursing HMOKeefe, I’m elevating my foot, learning the art of trashbag duct-taping to prevent wet bandages, and enjoying, so to speak, the soft puffy pink cloud that my brain turns into on Loratab.

I’m also catching up on sleep, reading and laundry. The problem is that Chapter 3 makes no sense because I can’t remember Chapter 2. The other problem is I get so caught up in the wonder of fabric textures that my clothes wrinkle before I can get them folded. So, I’m trying to stretch out the Loratab fix as long as I can so that I have a couple of productive hours now and again.

But as inconvenient and unpleasant as it all is, I’m getting some badly needed downtime. This working 70 hours a week crimps my lifestyle. The puppies are delirious with joy that I have time for them – they’ve been even more neglected than this blog.

So, fa la la, people. I’m back – at least for a few days while I enjoy Loratab la la land.

8 thoughts on “A Not So Fun Silly Shoe Season”