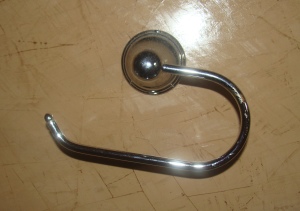 I mean, really, how long could it take?

From my earliest memories, I have been a procrastinator.

I’ve read some stuff about the disorder (fear of failure, etc., etc.) and I’ve concluded that I simply have a procrastination gene. My evidence? My father is a procrastinator.

I will put off the stupidest shit – like putting a new roll of toilet paper on the holder. Really, how long can that take? Or putting the bag of dog food in the laundry room. If I can’t bring myself to do that, you might be able to imagine what a larger project is like.

I even put off stuff that I’m going to enjoy. Right now I should be at Toys ‘R Us buying bouncy balls (separate post later unless I procrastinate to the point where the time to do what I’m planning to do has passed).

Periodically, I will let the house get into the state it is in now (Super Fund Site). I know from past experience that I can restore enough order to really feel good about myself in less than a couple of hours. 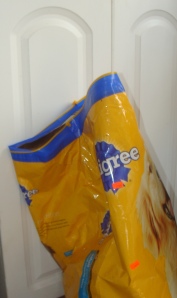 Well, the contrast between the cabinetry and the packaging is kind of interesting.

If I have something important, but unpleasant to do like taxes, I will fret myself into a frenzy. I will get up a head of steam and do EVERYTHING but taxes. I guarantee you that if today was April 13th, the toilet paper would be on the roll, the dog food would be in the laundry room, my kitchen would be clean enough to perform brain surgery on the table and I’d be at the Lowe’s buying paint for the family room with a side trip to purchase bouncy balls. I would organize my spices alphabetically, iron the towels, vacuum the car, and give myself a pedicure.

I’ve had a new-to-me computer sitting in my study since August. It’s going to be a pain to set up and so there it sits. This computer will make other areas of my life so much simpler and yet. . .

Did I pick up the hanger after photographing it? No.

The car needs an oil change. The puppies need grooming. There’s a basket of clean laundry that has been sitting on the kitchen table for a week that will take less than 2 minutes to put away. There’s a hanger on my bedroom floor that I trip over twice a day. There’s nothing in the house to eat (I really hate grocery shopping). I’ve had a pair of shoes sitting in the backseat of my car for nearly a year.

Even this blog post is a procrastination aid. But if I had nothing to do, but post to the blog, I would be outside in the freezing cold “weeding” the garden.

Now in my defense, I am a busy person. I have a killer work schedule and I’ve had some social obligations that sucked what free time I have. But even if I was unemployed, a childless orphan, and friendless, I don’t think things would be much different. Maybe they would, if I was unemployed the immediate task at hand would be the mailing of resumes, so I would probably be doing everything but.

With any luck, I have now embarrassed myself to the point that I’ll get moving.

3 thoughts on “The Undisputed Champion of Procrastination”