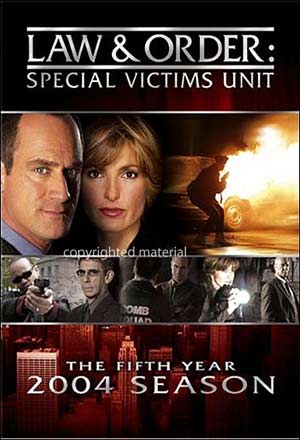 I find the whole phenomena of New Year’s resolutions interesting.

It’s striking that the custom occurs immediately following a holiday season where most of us are focused on other people – get-togethers, shopping, cooking, and the like. I suppose there are some people who resolve to make their spouse a better person or determined to manipulate their boss into bestowing a big raise, but most folk concentrate on self-improvement.  I suppose that is a fitting end to the holiday season with its penchant to provoke most of us to abandon good habits, indulge in our worst ones, and suffer through the torments of shopping malls.

After a few failed attempts in my youth, I pretty much gave up the New Year’s resolution thing. My resolve usually peaks in August/September – that time of year has always felt like the beginning of a new year more so than now.

However, in 2008, known as Great in ’08, I made a simple resolution. I was going to quit, cold turkey, watching Law & Order. I still had satellite television service at the time and I spent 2007 sprawled on the sofa watching episode after episode. I couldn’t explain the compulsion. I’ve never been a huge TV watcher and the situation bumfuzzled me to no end – nevertheless there I was. The truly appalling part of it was that Law & Order can be found at any time day or night on one channel or the other.

Law & Order made me cynical and provoked me to look for the worst in people. I did not like the person I was after a 6-hour jag. And 6-hour jags were moderate sessions.  My favorite franchise of the show, Special Victims Unit, mirrored much too closely my job.  To some extent, my jags didn’t do much but extend my working day. 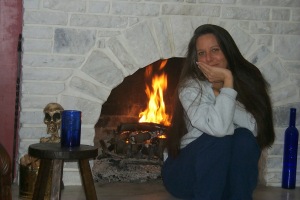 So. I announced my intention and jumped in my car to leave Massachusetts on January 1st. That first day of 2008 should have been easy, no? No. I hit a surprise blizzard in the Cumberland Gap and was checked into a motel by 8 p.m. with no cell phone service, no internet, and no book. (It was storming far too hard to stand around digging through the trunk of the car to retrieve my book. I never travel without a book.  I now never travel without a book  on the back seat.)

So? Guess what the only channel the motel television could pick up in the storm was? The one showing the 24-hour New Year’s Law & Order marathon. Other than lying on the bed staring at the ceiling, I didn’t have much of a choice. I still had adrenalin rushing through my system after the terrifying drive in search of a motel.

I checked out the next day, re-affirmed my intention, and have not watched the show since. Cancelling the satellite no doubt was helpful. It is the only resolution I’ve kept faithfully in my life. 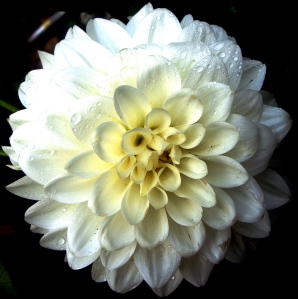 Last year, overly optimistic with the success of 2008, I pondered which one thing I most wanted to do to improve myself. I had already dubbed the year to come Fine in ’09 and was centered and focused on emotional equilibrium and quiet contentment. I plotted out a number of changes and activities to provoke such a sense of well-being not the least of which was Gardenpalooza.

Well. If you’ve been reading this blog you know that 2009 was anything but quiet or content though great strides were made in the garden. It’s been a flippin’ awful year. HMOKeefe waited until I’d left town to have a heart attack and he closed out my year with a stroke. (It wasn’t a good year for him either.) My financial situation went down the tubes. Interspersed throughout the year were unexpected family deaths, health problems, house problems, job problems, puppy problems,  Through most of it, I gardened or planned the garden or admired the garden.  The garden, as much as the people who love me, got me through this trying year. 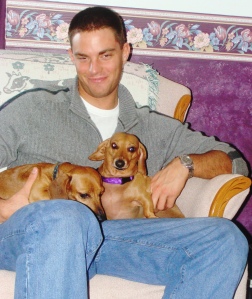 And while 2009 was flippin’ awful, it was also right good. I had a ball in the garden; I had a magnificent birthday; and I found the wherewithal to ease the financial problems. Chef Boy ‘R Mine was the light of my life.

And so, with ‘10 dubbed Total Zen in 2010, I’m pondering what resolution(s) I can make to ensure the slogan becomes true.

A number of things come to mind:

1. Get my diet back on track. My eating habits have become awful. I’ve always had a relatively good diet, but this last year has found me eating almost nothing but junk food. The resolution has nothing to do with losing weight, that’s not particularly a need right now;  it has to do with feeling good and feeling healthy. Healthy food takes time and money.

2. Get back on the exercise bike. Get back to yoga. Get back to meditation. This is a time problem more than anything else. While I don’t yearn to ride the bike, it’s not that bad. After a bit, the white noise kicks in and I feel good. And I feel very virtuous after 30 or 40 minutes on it. Yoga is immediately soothing. Meditation is hard work, but I had been noticing microscopic inroads to a sense of No Mind when I gave it up.  I’m a mass of flab and wasted muscle not to mention a future cardiac patient.  It occurs to me now that I could combine the bike with the meditation. 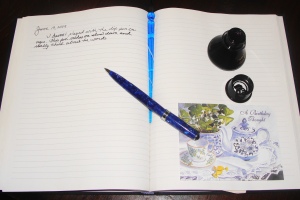 3. Write more. Writing is deep play for me. Again, this is a time thing. I need, or think I do, a minimum of 2 hours to produce anything other than a down-and-dirty rough draft. I enjoy writing. I keep most of it to myself and that’s fine. Writing is exciting, contenting, and all-around good for me.  Of the stuff I share, mostly this blog, my time constraints have provoked blog postings riddled with typos and thoughts not well-fleshed out.  While I enjoy it, flaws and all, I think my readers deserve better.

4. Learn how to clean the house in dribs and drabbles so that it never again gets into the state it’s in now. Like I said, I enjoy a clean house. The more chaotic my life, the more I need orderly surroundings.  Today, I have thus far restored order in the dressing room and dusted and re-arranged my vanity.  I feel so virtuous with this little act of domesticity.  It seems a simple thing to do and not one that takes much time or money.

5. Figure out how to spend more time with friends and family. I’ve neglected both shamefully. That time thing again.  When I do make the time, I never fail to note the blessings of having good people in my life who love me warts and all.  That’s a gift beyond price that I’ve played much too casually with.  How many people in the world pine for one good friend?  And I have so many.  How many people pine for unconditional love?  I have so much.  How many of those people know I treasure them?  I’m not sure.  It’s time to be sure. 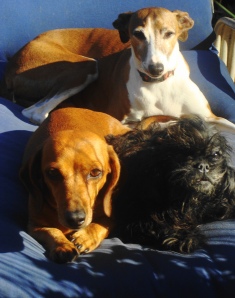 6. Be a better pet owner. My puppies have suffered far too much loneliness and neglect with my hectic life. I haven’t taken them for a walk in forever; in fact, I haven’t even sat on the sofa and cuddled with them in weeks.  I banished them from my bed when menopause provoked sleep problems.  I miss that time of cuddling and I really miss Trudy as a foot warmer on cold winter nights.  I think I have a handle on the sleep problems; tonight will tell.  I intend on settling down with three puppies in the, now, cobweb free bed.

So, it’s pretty clear to me the resolution needs to be More Time. That’s not a simple problem to solve. I’ve done a fair job of streamlining my life to squeeze out as much time as possible, but I have to find room for improvement.  Every aspect of my life, save the bank account, is suffering the effects.

I don’t need a failed New Year’s resolution to further batter my self-esteem, so I’m going to focus on eating better, being a better Puppy Mama and spending more time with family and friends.  I finally worked up that head of steam I’ve been hoping for and blathering on about for the past few days; the house is getting there (if you ignore the plumbing problem I discovered this morning).  Already, I feel more tranquil, more relaxed, more at-home in my skin.  Intermixed with the cleaning, I have talked to family and friends.  I have cuddled with and played with puppies.  I’ve foregone the junk food and treated my body to some real nutrition.  It’s not rocket science to figure out these actions make me a better person – the ultimate in self-improvement – and these actions are good for the people (and puppies) I care about.

I’m pretty sure most of us need Total Zen in 2010. So my wish for you this year is that you achieve such in whatever way is best for you to go about it.  And let the people you love know that you love them.  These actions shouldn’t be phenomena; they should be rooted deep in our lives.

9 thoughts on “The Phenomena of New Year’s Resolutions”