Biscotti for the creme brulee.

Tomorrow I am expecting a house guest I’ve never met. I’ve been in rather a panic getting the house into some sort of order to receive visitors. To some extent, I’ve said screw it. But still. . .there’s a need for basic cleanliness and order.

I’m very excited. I didn’t have a lot of advance notice which is probably good. I’d have driven myself and everyone else mad.

Chef Boy ‘R Mine has arrived as well. He’s been cooking up a feast and helping to clean. The barn is pert near always two steps forward, one step back – improvement is made in tiny increments with each project uncovering a larger project. This has been no different, but since I’ve grown to expect such things, it doesn’t produce any extra stress. OK, not much extra stress.

[The mess in the plumbing closet was stressful, but I’m Scarlett O’Hara-ing it for the moment. You know – the old I’ll think about it tomorrow.] 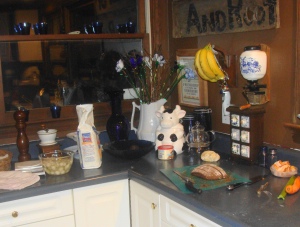 Good food, but what a mess.

My house guest has never seen snow. If she’s never seen snow, it’s a given she’s never experienced this kind of cold. Florida born and bred, Guest O’Mine is in for a rude awakening. We’ve borrowed a 4×4 for the airport pickup to avoid her having to trek the hill (in the snow) dragging her suitcases behind her. We’re thoughtful people, we are.

The food, if not the surroundings, will be stellar. The kitchen, however, has been one step forward, two steps back. When I went to bed last night, it was OK, this is adequate. Hah!

The kitchen is a mess.

The food will be fabulous.

At present, we’re both taking a break. Mind you, there’s not any time for breaks. There is still much to do. Much. Much just to get to the minimum. He’s chatting away on his laptop, puppies happily nearby, and I’m blogging on my laptop. I think we both have a problem with priorities. Or maybe we don’t. Making connections with people is more important than ones with Mr. Clean.  Right?  Right.

[I swear on my honor, that I wrote all of the above before the following event occurred. Scout’s honor. Honest. Absolutely. With no exaggeration or storyteller’s license involved at all.]

I’m now officially amused. I sent Child O’Mine up to the bathroom to help me switch out the toilet seat. There was a bolt I couldn’t get to budge. The bolt is held on by a plastic wingnut. We did this and then we did that. And there were a lot of exclamations of WTF! So we did some more of this and we did some more of that – all of it involving wrenches, needle-nosed pliers, flathead screwdrivers, and much cursing. Nothing. And it wasn’t that the bolt wouldn’t move – it moved all over the place. The top of the bolt could be turned in the opposite direction of the bottom part of the bolt. WTF?

[Things like this routinely happen in the barn. I’ll eventually get around to the thermostat story.]

We pondered things for a bit. Chef Boy ‘R Mine said, “Wait. I’ve got an idea.”

Now he’s been cooking up a storm. When he comes here, he brings the tools of his trade with him. Since he’s planning crème brulee, he had a kitchen torch – a twinkie torch by anyone’s standards – used to brown meringue and that sort of thing.. 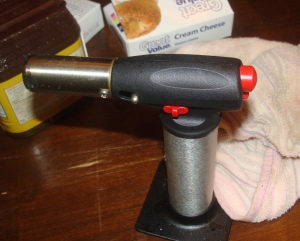 Creme brulee carmelizer or plumbing tool? It's both.

We melted that wingnut off. OK, he did. After I was sure the toilet wasn’t going to explode, I guffawed and told him he was genius.

[He takes after me. I once solved a pesky countertop installation problem with a bread knife.]

A $20 Williams & Sonoma cooking torch as a plumbing tool – who’d have thunk it? Me and Chef Boy ‘R Mine, that’s who.

I can’t wait to tell the girlfriend, OOPS, I mean, houseguest this story.  (Damn, let the cat out of the bag.)

Now, I’ve got the giggles, but I’ve got to go finish that bathroom now.

8 thoughts on “A House Guest”