1988 was an interesting year. If memory isn’t tricking me this morning, ’88 was the year we moved into the barn as our residence.

It was rough – both the barn and life in the barn.

We had electricity and one working toilet. That was it.

I cooked in electric fry pans, crock pots, and a silly little portable burner. We trooped down to my parents house, towels and toothbrushes in hand, to shower. 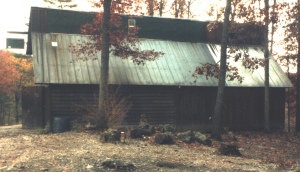 Eventually, we had water, but still no bathtub. I washed dishes in a tub outside on the picnic table.

Eventually, we had a tub. Sheer luxury.

We had no phone. [That proved to be rather nice. In fact, well after we could afford it, we lived sans phone.] We had framing and insulation, but no walls. There was no kitchen to speak of, though I did have a stove – an ancient thing that we bought used somewhere. The ex’s work bench served as the dining room table and it was a plum pain in the ass to move the table saw every time it was time to eat.

We picked up some kitchen cabinets somewhere – they were beat up, ugly and not well-made. I danced in joy.

In 1997 – 9 years later, we gave up and procured a construction loan. We hired a contractor. Then the fun really began. It was a nightmare; it was a dream come true; it was frustrating and, finally, the not-quite-finished barn was a not just a loved home, but a real house. It looked like a badly-built California Contemporary, but I adore every square inch of it – still do, worrisome warts and all.

Except for recent projects, nothing has been painted since 1997. The barn has been in desperate need of interior paint and exterior stain. The exterior is daunting, so I’m concentrating on the interior.

The most annoying part of paint prep - getting things out of the way.

The family room is now underway for a new paint job – Wellspring Blue. The color is dark, maybe too dark, but right now I love the color in the can. As part of paint prep, I removed the books from the top of the semi-built in bookcases and found a toothbrush still in its packaging up there.

Puzzled, I carried the oral instrument into the kitchen. While I don’t clean often, the top of the bookcase has been cleaned at least once a year since 1997 when it was installed. The most recent cleaning was about this time last year.

The flattened package was a major clue.

I peered and found a 1988 date on the packaging. Truly, a WTF moment. We didn’t have bookcases until ’97 and the top has been cleaned, while not frequently, at least often enough that missing the toothbrush was unlikely. The toothbrush package was flattened, but clean and dust free – an important clue.

Old Webster gets more of a workout than one would think.

[The barn is a retirement home for dirt and dust – truly, Jehovah could create an entire metropolis of people from blowing on the dust of just one room.]

I have deduced that the toothbrush fell out of a book. The ex used to use all manner of strange things as a bookmark. That’s the only reasonable explanation. I thank him for that habit – 1988 has come flooding back. To quote Dickens; it was the best of times, it was the worst of times. . .

These times are also the best and worst – the yin/yang that life always seems to be. I’ll probably keep the toothbrush. De-junking is one thing; but little memory provokers here and there keep me grounded and cognizant of the yin/yang.