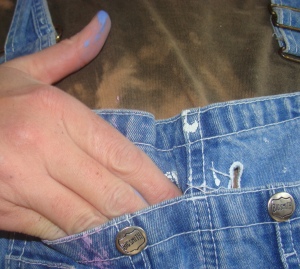 My hands are dirty – paint stained, chemical burned, broken nails – but mostly they’re dirty (and into the Doritos). And old.

Nowhere, as much as my hands, does my age show. My hands have done so much.

As I try to coax paint out from under my nails, I think of all the dirt, grime, debris, and ick my hands have been in during my fifty years. Those thoughts lead to all the other things my hands have done. 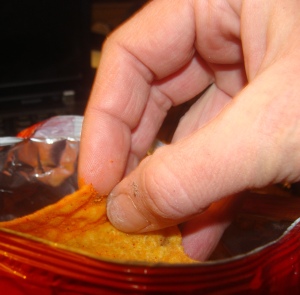 I have painted so many times – my first apartment the first time I did it alone. (A tasteful beige to cover up the hideous peach that attempted to mute the reddish orange carpet.)

Last summer, I was up to my elbows in garden dirt, ripped to shred by blackberry thorns, and happy.

I’ve been midwife to dogs and cats having puppies and kittens.

As a child, my hands were always dirty – finger paints, mud, dirt, tadpole ponds, pudding from the bottom of the bowl, and all the grime a little girl afraid of Not Much could get into.

I hesitate to say dirty, but my hands were bathed in the blood and fluids of my newborn son when they let me hold him just a few moments before rushing him to the Neonatal Intensive Care Unit – his tiny body held carefully and joyfully and tearfully.

My hands were clean for my first day of school, girl scout meetings, to make the pudding that later ended up on fingers and face.

My hands had been cleaned until as sterile as possible to caress that 3 lb. baby through the openings of an isolette.

Clenched in pain at news of a death.

They’ve put roses in a coffin and roses in the ground.

My hands have wound music boxes and played air guitar.

Typed a million words – some at 90 words a minute. 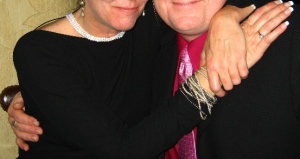 They’ve wiped my tears and the tears of others.

They built cement block houses during an earthquake recovery mission in Guatemala.

Fed chocolate pudding to street urchins in Mexico. Carried a passport in London and luggage in Canada.

Tried to crochet a hundred times.

And mowed acres of grass.

My hands are old with the joys and sorrows of life; like my eyes and mouth, the wrinkles are my life written on my body – witness to fifty good years and some bad times.

With palms up, my eyes closed and my mouth open in a near silent om, I wish for fifty more years of filthy hands. Clean hands. Holding hands. Busy hands.