What do Eric Clapton, Dexter and dog biscuits have in common? They, and a multitude of other surprises, were my Valentine’s gift from HMOKeefe.

He sent me not one, but two, boxes. They arrived Friday and I opened the packing boxes just enough to make sure the contents were intact. And then I closed the boxes back up to wait for Valentine’s Day. [I drive people crazy with that. For me, the anticipation of opening is almost as exciting as the gift. I’ve been known to wait until after the New Year to open Christmas gifts.]

I noticed when checking the packaging that there were dog biscuits. I had to smile. If not for HMOKeefe my dogs would never have treats other than the occasional marshmallow. [All three of the dogs would produce cold fusion in their water bowl if they thought it would get them a marshmallow.]

The two boxes have been setting on my kitchen table for two days. After a couple cups of coffee and the fixing of my DSL jack (long story), I opened the boxes.

Woo Hoo! Too much fun. Besides dog biscuits, inside I found books including how to go about writing your first novel in six months, a kaleidoscope, green M&Ms, an Eric Clapton and Steve Winwood CD, hand and foot warmers (presumably for my trek up and down the hill in the snow), a refrigerator magnet, candy, and panties.

The magnet reads You are unrepeatable. There is a magic about you that is all your own… I think that applies more to him than me. I’ve never met a man like HMOKeefe. He is the perfect man.

Now is that a plethora of treasures or what?  There was also a season’s worth of Dextor episodes nestled in there.  Woo Hoo!  Blood spatter and a serial killer for Valentine’s Day. Damn, I love that man.

Much of it, including Dexter, was packed into a heart-shaped, red box which reminded me of an earlier Valentine’s Day. One year, along with a lot of other things, HMOKeefe sent me nesting boxes vividly emblazoned with roses. As a child, I loved playing with the Barrel of Monkeys that featured nesting barrels and a tiny monkey in the smallest one. I love Russian nesting dolls. I love containers. I’ve had those boxes, nested, sitting here and there pending completion of the painting and decorating projects for a long time.

After seeing the heart box of this year’s gift, I stacked the boxes and put them in the corner of my dressing room – for months now, that corner has cried for some decoration or furniture. They’ll be perfect there.  [The stack is as tall as I am.]

I know just what to put inside each of those boxes.

HMOKeefe frequently sends me letters and cards. I save them. I have stacks and stacks of them. Periodically, I like to go through them and re-read them, but they’ve gotten unwieldly and some of them have been packed away and buried in one of the three Closets I Am Afraid Of. [No kidding, you can’t believe how many there are and you can’t believe what a mess those three closets are – you’d be afraid too.]

Those boxes will perfectly house his words of affection. [And, Dman? You best get writing – I’m going to need more or the boxes will topple over.]

And speaking of love letters, my Valentine’s Box also included a love letter scrawled on a legal pad and tucked into a beautiful card. He once made fun of me for sending him a letter written on Mead 3-hole punched, college ruled notebook paper. Again, I had to smile.

One of HMOKeefe’s great charms is that he makes me smile with his thoughtfulness and caring. I do love this man. In answer to his question in the letter and on this morning’s voice mail, yes, I will be his Valentine again this year.

He mentioned the other day that we should start looking at engagement rings. I was rather nonplussed since we have yet to live in the same zip code. [For those of you who don’t know, he lives near Boston.]

I reminded him that I used to think I didn’t like diamonds until I discovered that actually what I didn’t like was small diamonds. I haven’t heard another word about engagement rings since. It was with some relief that there was not a ring in one of those two packages. 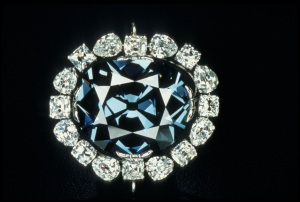 The relief centered on the fact that I would like the experience of shopping together with him to find the perfect ring. HMOKeefe likes to shop – one of the many things I like about him. I think it would be fiercely romantic and a lifetime memory to choose it together. Besides which, I desperately need a manicure.

This blog posting is my Valentine to him. I think he’ll enjoy it – a love letter of sorts – not the norm, but that’s what I love about his gifts to me – wonderful little oddities packaged with love.

[The puppies don’t know it yet, but they’re about to get a Valentine.]