This is a repost in response to the Rainforest Action Network’s call to let Chase Bank know that folks don’t like their part in the destruction of America’s mountains.  Go here for more info on what you can do to get the message to Chase Bank.

Frank, the guy who built the barn, leveled off a hill, bulldozed it, trucked in gigatons of gravel, and then parked big rigs on it.

Breaking ground for a new garden is unbelievably difficult. Before I can do anything, I have to get the gravel out. This can only be done after drenching rains with the aid of a pick axe, a lot of determination, and hours of time.

Where I could, I made raised beds, but that’s not always possible. When I say Frank leveled the hill, I mean that in a broad sense. My yard is anything but level. If I tried to level it with raised beds, the roses would be level with my roof line.

I break ground, usually, in small increments – about 3×3 feet. It can take the better part of a day. The gravel is predictable. First I will have a thin layer of small gravel embedded in leaf debris and the topsoil that has managed to form in 25 years. Below that are huge chunks of gravel – the size of my fist or larger. That layer is a good 8 inches thick. When I get the ground broken enough to get to it, I pry one piece at a time out with the aid of a crow bar. It’s ‘orrible, it is, it is.

After all that, I cart the gravel out and dump it on the road. Then, one 40 lb. of soil at a time, I put earth where there had been geologic atrocities. Conservatively speaking, I have nearly 2 acres of gravel.

When we put in the fence, we used a jackhammer. It’s bad. Really bad. I am not exaggerating. [I reserve the right to exaggerate in future stories, but it’s not necessary in this one.]

To be cursed with this gravel situation is an irony of sorts, because I like rocks. I have rocks scattered all over my house. Instead of tacky seashell wind chimes and t-shirts, I bring home rocks as souvenirs. (I also bring home shells, driftwood, seedpods and other pieces of nature that strike my eye.) They sit on bookcases, dressers, desks, my dashboard, in bowls, and on counters. I like rocks.

A few years ago, you couldn’t go anywhere without encountering a bin of polished rocks with words engraved in them. Man…I love those things. Words and rocks – it doesn’t get any better. I have a whole bag of them plus a bunch of them scattered around the house and one, very precious one, tucked into a medicine bag hanging from my rearview window. I like rocks. I really do, but I quit buying them when I learned whole mountains were being mined to satisfy my wordstone need.

But more than rocks, I love mountains. I cannot fathom how anyone can defend mountaintop removal mining. They take a beautiful mountain, covered in magnificent trees, teeming with wildlife and reduce it to gravel.

The myth of it being good for the economy is usually cited. Balderdash. Coal companies are hauling far more coal out of here than anytime in history and simultaneously employing far fewer people to do it. And if coal is equivalent to economic prosperity, why are the largest coal-producing counties the poorest. The emperor has no clothes.

In a state that has suffered economic deprivation for generations. I understand the problems that could result should the practice be banned. But at what cost do we annihilate our mountains? When we destroy them, we not only lose them, but we lose our communities, our history, and our culture. 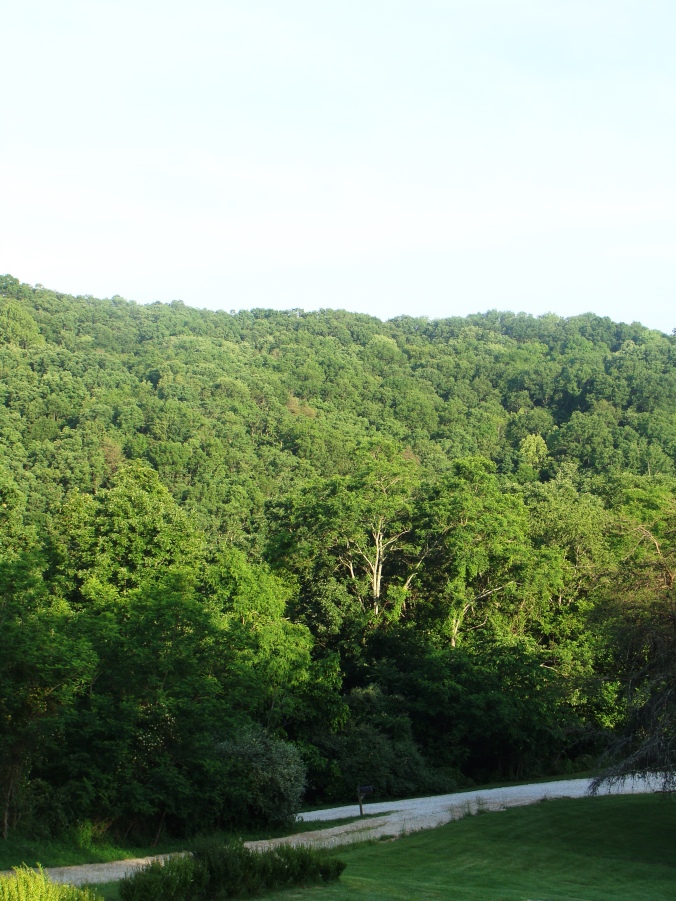 When my son was born, my (ex)husband and I suffered a radical economic setback. Our goal was to climb from destitute to simply poor. It was another horrible situation. I could have sold the kid and ended the poverty.

I could have. Would I have? Nope. I believe the word is inconceivable.

More knowledgeable people than I have railed on the subject of mountaintop removal mining and I listen to them carefully. I can’t retain the facts and figures. I can’t discuss at any depth all of the issues surrounding the practice. I’m usually good at such things, but in this case I can’t get past the initial shock than anyone could think this is a good idea. All I know is I would no more destroy one of these mountains than I would sell my child.

I hate gravel. I like rocks. I love mountains.