It’s been suggested that most folk choose their wine based on the bottle. While I’m not immune to the charms of a nice bottle, all other factors being equal, I am usually more interested in what’s in the bottle. I veer towards the Chileans. You can’t buy a bad bottle of Chilean wine. The price is beginning to reflect that, but it used to be you could have a damn fine wine dirt cheap. Most of the Australians are good as are most of the South Americans if you’re looking for affordable yet decent wine.

With all that said, my palate is not that sophisticated. I’d recognize the label, but I’ve become partial to a wine sold at the Kroger – a nice cabernet IN A BOX with an 87 rating from Wine Spectator. It’s hard to burn a candle in that puppy once I’ve drained the last glass of wine, but I buy the stuff to drink – not to decorate.

Or at least that’s mostly true. I do have some wine bottles scattered about the house because I like them. My favorite is a long, lithe cobalt blue one that used to house a crisp pinot grigio. And then there’s the Tom Robbins bottle. (I’ve also got a tequila bottle that HMOKeefe drained on the Mexico trip – tequila? I don’t touch the stuff. But that bottle sure is pretty and HMOKeefe buzzed on the worm was a sight to see.)

Those of us of a certain age will remember chianti bottle candle holders. In fact, I used to buy chianti just for the bottle because all the cool girls had candles and, well, I couldn’t be left out could I?

As I perused wine at the Drug Emporium (no kidding – one of the best selections around), I was dumbstruck in the Italian section.

I’ve been in the throes of painting and as I finally whittle down the number of rooms in need of painting, my thoughts turn to the dreaded hall that houses the stairs. This area is going to be horrible to paint and I have to get the color right the first time. If I manage to complete the stairwell in my lifetime, it will be the last time that area is painted. The color choice is complicated by the open floor plan and getting the exact right color is critical. Critical, I tell you. The fate of the free world hangs in balance.

I’ve been flirting with the idea of a pinky peach – or peachy pink – that color where fuchsia and tangerine run away to Morocco for illicit sex under a slow-turning ceiling fan. The color your eyelids turn after two strawberry daiquiris on a beach blanket. The color that is the sound of passion. You know. That color.

So. There I am in the Drug Emporium choosing a wine when this chianti bottle leaps off the shelf and into my basket. I’m not really a huge fan of chianti, but this bottle is kicker. The straw casing weaves fuschia and tangerine together and produces that color. While that hallway will most likely end up a matronly forest green, I do now possess a retro-trendy chianti candle holder for my soon to be completed study.

And if the chianti bottle wasn’t exciting enough, I was stopped dead in my tracks at the clearance shelf. Indeed, I gaped in astonishment.

Most folk don’t know it, but at one time I was the world’s foremost expert on Minoan blue monkey frescoes. Really. For all I know, I still am. I haven’t kept up with the research. But I wrote the best research paper of my life on the mystery of why the Minoans, living on an island in the Mediterranean, were provoked to draw blue monkeys on their walls. I didn’t actually answer the question, but I had a lot of fun ruminating. You may, as I did, find it curious that people have been including photos of the blue monkey frescoes in anthropology, history, and art books for decades and decades without ever addressing the question as to why a bunch of proto-Greeks were decorating with a monkey motif. 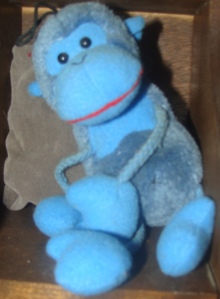 So, I’m admiring my chianti bottle and considering taking it to the paint aisle at the Lowe’s, when I discover the blue monkey wine. It’s a zinfandel and I’m not a huge fan, but, really people, it’s in a BLUE MONKEY bottle. Serious. How could I not buy it?

So. I now have two bottles of wine I bought simply for the bottles and which will become decorative items in my study. God help me, I’m decorating with wine bottles plus I’ve spent $30 on wine that I don’t particularly like. It’s a big old goofy world and I’m the leading lady.