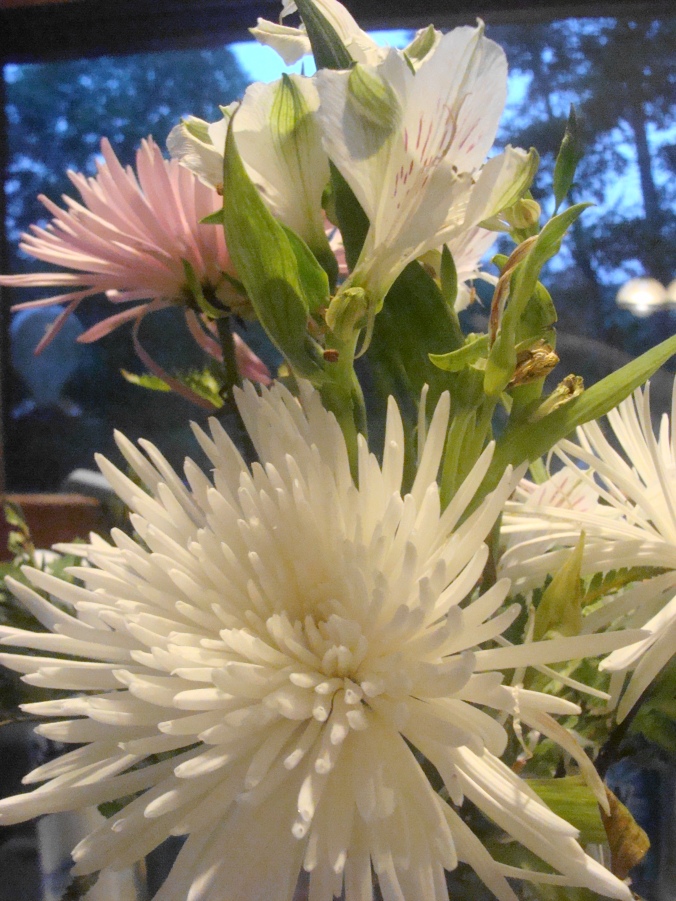 Remember you must die.

Chef Boy ‘R Mine sent me flowers for Mother’s Day.  I’m one of those women who like to receive cut flowers as a gift.  It’s especially nice when delivered by a florist.  And better yet because they were from my son.  The first I’ve received from him.

The florist delivered them to the wrong house, but they got to me in short order.  And they were beautiful – roses, ferns, asters and lilies.  They were beautiful as was the vase provided.  It’s a square, heavy, clear glass vase that will get plenty of use in the years to come.

I was pleased with the vase, because once the flowers were spent I would have it to remember the first time my son sent me flowers.

The flowers and the vase have comingled on my kitchen table for the past few weeks, one dead petal after anothing dropping.  The ferns browning, the roses drooping.  The water clouding.  The vase gathering dust.  As I tried to restore order to the house, I would walk past the arrangement making (another) mental note to throw the flowers out, wash the vase and store it in a cupboard.

Eventually, I got around to it.  When I pulled the remains of the flowers, I discovered that a few of the blooms were still beautiful, still “lively” – I discarded the dead and brown, washed the vase and restored the survivors to clean water.

It’s a beautiful ensemble.  With only a few blooms and a couple of ferns, this new arrangement is much simpler.

Memento Mori is a Latin phrase that translates as Remember you must die.

Well, I suppose so.

Sometimes when you get rid of that which is spent, you uncover something equally delightful.  And there’s no need for the cupboard – not yet.

2 thoughts on “Memento Mori (minus the mori)”