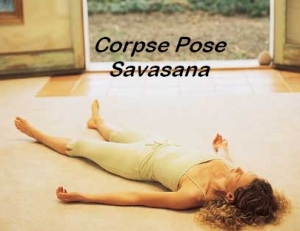 This is an actual asana (position). It's one of my favorites. Now c'mon people - why did it take me a week and the purchase of a book to force myself onto the floor to do this - knowing I would feel better?

I really dislike being a cliché, but, yes, I’m just another middle-aged woman with a bunch of bad habits who thinks yoga is going to rescue me from myself.

There are worse delusions.

A few years ago, I regularly practiced a very lazy form of hatha yoga. My reward was a flexibility that surprised doctors and which I took for granted. I have long attributed yoga as being the reason I am not in a wheelchair. As my neurosurgeon said, “Whatever you’re doing, keep doing it.”

In April of 2007, I was in a car wreck that looked to be minor. There was $400 damage to my car and $32,000 (and counting) damage to my body. The first six months were lost in a miasma of pain and medical appointments – orthopedist, podiatrist, chiropractor, physical therapist, massage therapist. There were pain pills, outpatient surgeries, a walker, crutches, surgical shoes, ice packs, steroids and much complaining. Yoga was impossible when simply getting out of bed or up out of a chair exhausted my physical reserves.

The acute phase of my injuries passed and I thought I had reached a point where I could return to yoga class.

The yoga class I attended at the time of the car accident barely meets the definition. It is terminally a beginner class – ideal for out-of-shape Westerners with no interest in the mental aspects of yoga. I began attending this class when the woman who introduced me to yoga retired from teaching. I miss her still. She, too, didn’t press us too far outside our western sensibilities, but she did gently push us into more challenging poses and did discuss how our brains could become as flexible as our bodies if we paid strict attention to our breath, the position of our bodies, and our attitude towards the world.

Shiva Rea doing what I could almost, but not quite, do at the peak of my practice.

I was intrigued enough that I studied on my own and practiced on my own. Most yoga folks will tell you that a formal class is indispensible, but that daily home practice is just as necessary.

I’ve done neither for the better part of three years. I tried to return to class, but ongoing problems with my foot and hip made formal class a debacle. On one occasion it took the instructor and a classmate to get me up off the floor. More importantly, my return to class resulted in a return to pain. A cardinal rule in yoga practice is Do No Hurt – the very antithesis of no pain, no gain.

This is why a formal class is indispensable – it keeps you motivated and humble. The closest I’ve come to yoga at home is to push aside my unitard in search of a pair of leggings to wear to bed. Foolish me.

This past December I had what I hope is my final foot surgery. Unlike the previous two surgeries, this one seems to have taken – the pain is finally gone and my foot works like a foot should.

Due in part to the novel about India I just finished, I’ve been feeling like a back-slidden yogini. [And, yes, I do hate that word for its pretentiousness, but I have no other to use.]

More importantly, I’m about as flexible as a potato chip and everything hurts. I’ve lost a lot of ground in three years.

I could do this - and do it well. It's a lot easier than it looks and my back feels so good during the pose.

It’s been hard to get started. I have the books. I have the mat. I have the DVDs and audio tapes. I have the unitard. That formal class still meets every Tuesday. That vanity thing again. I have to start over from the very beginning. Lie on the floor, arms and legs gently flexed and relaxed. Breathe in. Breathe out. Push your spine flat to the floor. Hold. Release. Remember to breathe.

I’ve been mentally preparing myself for a return to regular yoga practice. Mentally was as far as I got. I simply could not force myself to get up and lay on the floor to begin despite the fact that under normal circumstances yoga has always, ALWAYS, been an activity of deep contentment – even as a beginner, especially as a beginner. There was a time I rushed to the mat to begin the descent into the pleasure of a united brain and body.

I am very aware of the mind/body split. I can get lost in what Diane Ackerman terms Deep Play – a time when my brain behaves like a Ferrari – effortless coasting at high speed and cornering like a dream. I can get lost in the physical sensations of hard work while gardening or working on the house – reveling in muscle fiber stretching, relaxing and increasing. Yoga joins those two states of being.

I could not, cannot, understand my reticence to begin practice again. I did everything except get on the mat and begin. I suppose discovering how debilitated I’ve become was part of it. Part of it could be sheer laziness. Mostly it is chagrin. I didn’t do what I knew I should.

Today, I went to the book store to escape the humidity of this hot, stormy afternoon. I ended up in the yoga section, squatting on the floor, cursing the pain in my hip and the ache in my back. I was looking for the Holy Grail of DVDs or books. I looked at the jacket of each offering trying to decide if this particular one would have the phrase or the image I needed to get me on the mat. All the while I told myself the problem was a lack of discipline and no book, no DVD was going to provide the impetus I needed.

After struggling to get up off the floor, I walked over to the café with B.K.S. Iyengar’s Yoga Wisdom & Practice. Iyengar is credited with creating the yoga renaissance of the past few decades. It’s a beautiful book of lithe bodies, gorgeous symmetry, the power of simple words that sound stupid to people who haven’t experienced the mind/body fusion of yoga.

It turns out I was wrong. In spite of the balance in the checkbook, I bought the book. Just looking at those strong, flexible bodies, or perhaps it was the expenditure of money, provided the impetus to begin. I came home, dragged out the DVD most appropriate for a beginner, put on the unitard and made it through 28 minutes of a 40 minute program. I’m pleased I listened to my body and stopped when I should.

I feel good. My hip aches far less than it did. As I moved from seated positions to standing ones and back again, each successive rise from the floor was easier. By the end of the 28 minutes, it was hard to understand how it was I’d had so much trouble getting off the floor at the bookstore.

I expect to continue.

Below is Shiva Rea who is pushes a type of yoga called Vinyasa Flow Yoga. It’s a beautiful dance-like form. I don’t expect to ever be this good, but . . .