Note the look of horror on my
Guardian Angel's Face.

For weeks, I was in denial with a severe form of that brain itch that occurs during times of intense procrastination. One gray, rainy, cold weekend in late March, I began the task of emptying the little closet in the master bedroom for the Good Doctor to put his togs in.

I planned on giving him the little closet as he is now retired and, presumably as such, would need a less extensive wardrobe than I. Hah! The man is addicted to shirts the way I’m addicted to shoes. He has dozens and dozens, possible hundreds.

Nonetheless, it was a plan. Not much of a plan, but it was mine. I’m not good at planning and tend to avoid it, but when I do hatch one I hang on for dear life. The little closet it was.

The little closet was intended to house the boots, belts, purses, evening wear and other clothes I’m not likely to wear on a normal day. However, the big closet was so jam-packed with stuff that the overflow to the little closet was, um, tsunami-like. To clean out one required cleaning the other.

I was an anthropology major.
What can I say?

I donned my pith helmet and went in on an exploratory mission prior to the planned excavation. Oh, the horror!

Within minutes, I was in the kitchen scavenging in the chocolate cabinet for stress relief.

Throughout that weekend, I weeded and winnowed the closets. I tried to invoke the “if you haven’t worn it in a year rule” and was, at times, successful. I got rid of everything I didn’t absolutely love. I couldn’t bear to part with the stuff I absolutely love, but am too big (at present) to fit into. That “someday I’m going to drop 20 pounds and wear this again” vow renewed itself.

Lord, I tried. [Tried to organize the closet, not lose weight – it’s not a good idea to start a diet under stress.  The chocolate cabinet got a good workout.]

The socks are probably a no-go.

I was easily distracted – particularly by the shoes.

In 2007, I was involved in a car accident that messed up my right foot in a sort-of minor way, but which, nonetheless, required three surgeries. My foot was sore, inflexible and downright contrary for nearly 4 years. At the time of the closet excavation, I had just started wearing cute shoes again. I had reveled in the boots – pink suede, black silk, embroidered, tartan plaid, brown leather, red leather, black leather, beige fuzzy, rabbit fur, pom poms, granny, hooker, gold lame` and wine. 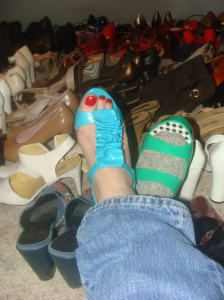 Still and all, I managed to drag out bags and bags of clothing and shoes. Some I trashed, some went to Goodwill and some went to Dress for Success.

And, yet, it wasn’t enough.

I probably neglected to mention that the big closet housed only the winter clothes. The summer clothes were crammed into the only part of The Closet I Am Afraid Of  that I can get to. While I planned for HMOKeefe to use the small closet, I intended both of us to use The Closet I Am Afraid Of  (and that he will be afraid of when he opens that door) for off-season stuff. (We both have far too many clothes.)

Since spring was just a whisper away (or so I thought – it was the winter that wouldn’t end), I felt it prudent to deal with ALL the clothes. Weed and winnow the heavy wool of weeks past as well as the linen and silk of weeks future.

Even now, there’s a bag at the top of the stairs waiting to go to Goodwill.

The winter clothes are in TCIAAO, but so is all the stuff I’m still afraid of. The boots won’t fit in either that closet or the big closet less I part with more shoes.  In fact, I’ve procured a few more pair of shoes since this frenzy started. (I’m particularly enamored of the strappy black patent leather sandals with faux pearls I bought in Massachusetts executing the move to get HMOKeefe down here.)  I could, I suppose, buy shoe racks, but then there would be less money for shoes.  This is a conundrum.

So the good doctor has been here nearly two weeks and is still living out of a suitcase. 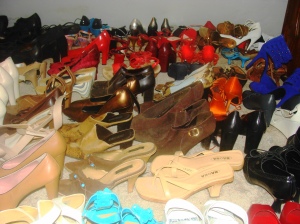 Yes, it is an addiction.
But it's cheaper than cocaine.

This weekend, I swear, I’m going to empty the boot/evening wear/accessory closet and organize a closet for him. That’ll bring the total of organized closets in this house to (ta da!) one.

Hopefully, it will be really hot so I won’t play with the boots. Except maybe the hooker ones – HMOKeefe is rather fond of those.

3 thoughts on “A Man Deserves a Place for His Togs”