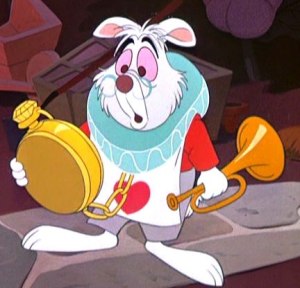 I feel stupid and silly to just now be realizing this.

Mantra’s root meaning centers on that which protects the mind. My mind is not protected by scurrying about chanting Moretimemoretimemoretime like the White Rabbit on cocaine.

“More time, more time, more time” might describe the great need of my life – for decades now – but pleading endlessly for it has not worked. In the tradition of affirmations, I should be muttering “I have all the time I need.”

Or so they say. 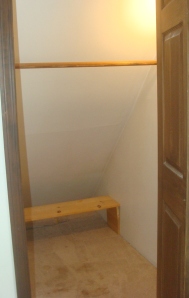 An empty closet! Hah! So there!

I don’t think I could say, “I have all the time I need” and not break into hysteria-tinged laughter which would, no doubt, defeat any power the phrase had in terms of positive thinking.

Here’s what I know: I’ve been running at 90 miles an hour for weeks now and I’m not even close to caught up. On anything. The hurrieder I go, the behinder I get. (I’m not sure who said that and I’m too exhausted to look it up.)

For all of my behindedness, I am getting some things accomplished. I scheduled recreation this weekend and I scheduled chores. I completed all the recreation, but I’m woefully behind on chores.

Friday, Terrific Trudy came home from the vet.  Her surgery was successful in that the vet thinks he got all of the cancer.  While the incision(s) looked horrible, she acted as if she felt okay.

I also spent one-on-one time with my best friend. She and I killed a pizza and discussed life in general over glasses of wine.

On Saturday, I puttered in the garden weeding and planting all the little darlings I bought last weekend. Just before heading in to shower, I moved the houseplants outside and put them in the ground. (You should hear them all giggle when I do that. They get so excited – it’s like a summer vacation camping trip as far as they’re concerned.)

After showering, HMOKeefe and I headed to Charleston for our first date night as a couple who lives together. We had dinner with friends at the Tidewater and then ambled over to see Saint Stephen’s Dream: A Space Opera. Dinner and the performance were spectacular. 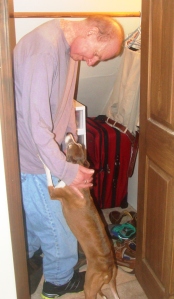 Today, HMOKeefe and I did (alert the press) empty the little closet and begin moving his togs into it. He no longer is living out of a suitcase in the guest room. After the closet triumph, I ran around in a White Rabbit on Cocaine Meets June Cleaver frenzy and vacuumed, scrubbed, laundered, dusted, sorted, scooted, corralled, set-up, tore-down and dejunked.

Alas. All the crap that was in the little closet is now spread all over the guest room. If I were a different person I might be tempted to say I have too many pieces of footwear.  But we all know that I am never ever, not ever, no way Jose going to say something that silly. 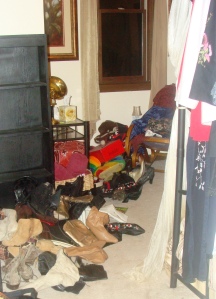 OK. Maybe a few too many pairs of shoes.

I still have to shower and figure out what I’m wearing tomorrow. Put in another load of laundry. Give Trudy her meds.

I swear. If I could just get caught up, I could stay caught up. But way too much life keeps happening. Still and all, these are the good old days. I think. No. I’m sure of it.

Perhaps that’s my mantra – These Are the Good, Old Days.

In any event, it’s now my earworm.

2 thoughts on “The Mantra of My Life”