From this angle it looks a little serene.

So, no. Today wasn’t a particularly good day to me, but it wasn’t all that bad either.

In giving advice to others, I often tell folks that if they don’t slow down, they’re body will take matters into its own hands. Good advice. I should have listened. My body kept me home today – a myriad of minor ailments no doubt brought on by the heat and the stress and the frenzy. In addition to the headache and what feels like the onset of a cold, I’ve managed to sprain my left wrist. I have no idea how that happened, but it’s a nice companion for the ankle that began swelling a couple of weeks ago. As with the wrist, I’m not sure what’s up with the ankle. The wrist aches, the ankle does not. I once woke up with a broken foot and didn’t know how that happened either. It’s possible I have an active dream life. It’s possible my life is just a lost episode of the Twilight Zone. It’s possible someone has a Connie voodoo doll.

So, I’ve wallowed on this couch today not even pretending to do anything of worth. Given the to-do list, many of the bulleted items bearing firm deadlines, I should feel guilty or at least panicked. But like I said, if you don’t slow down, your body will slow you.

And then the chaos begins to emerge.

So the couch is becoming a favorite. I inherited it from HMO’Keefe who inherited it from his inlaws. It’s a beautiful rattan affair – part of a whole suite of furniture. We know what a furniture junkie I am. I particularly like old furniture with happy vibes. This stuff fits the bill. It’s what you’d call Florida room furniture. At the pied `a terre, we had it in the sunroom where it seemed the room had been made for it. When it came time to move out, there was consternation as to what to do with it. Between Boston Boy and myself, we have 4 sofas none of which we’re willing to part with. So there was a lot of moving stuff around and when it shook out, the guest bedroom turned into Doug’s mancave, my study lost the old library furniture which went to Doug and the rattan furniture came in here. This will create a crisis when one of the younguns comes to visit, but I’ll worry about that later. (I really do think the offspring ought to have a bed to sleep on during their infrequent visits.)

this sofa in here was quite the feat. There’s an awkward corner and turn at the top of the stairs and the sofa was 5/8 of an inch too long. I was determined. Three men told me it wasn’t happening. I was more determined. I took the door molding off. I took the door off the hinges. I took the two strips of wood off the sides of the doorway – the strips that when everything is assembled stops and stabilizes the door. Even then, we beat the hell out of my drywall getting it in here. I’d have taken studs out if I had to.

It’s never coming out of here. I believe we’d have to saw it half to get it out. It suits this room nicely. I’ve sort of an Appalachian Tree House Tiki Hut vibe going.

I’m clocking some hours in here – it’s rough living with someone after years of living alone and liking it. I haven’t actually put a “No Boys Allowed” sign on the door, yet, but I may.

My wrist aches and keyboarding isn’t helping, but, oh well, this too shall pass.

So I have the rattan furniture in here and a giant piece of bamboo my dad brought home from Vietnam. I have the Maiden Mother Crone triptych of torsos and the Maiden Mother Crone painting. My art supplies are stacked here and there and the books are all boxed pending getting the mess downstairs straightened out and replacement shelving installed. My rolltop desk has not been toted up the stairs yet as I can’t do that by myself. Under normal circumstances, the broken zen of this room would grate like the Chef du Hashbrowns at the Waffle House, but this room is the best one in the house right now. Comparatively, it’s an Appalachian beach of treetop calm.

This is a whole lot more overwheming in real life. The hovel is behind the branches on the left.

And speaking of trees, I finally took a good gander at the derechoed (derechod?) trees out back. It’s a freaking mess. It looks like the hovel is spared, but just barely. Cleaning up and preparing the hovel for use again has been on the to-do list forever, but is rising to the top as my need for alone time increases. However, the hovel had structural issues and the vibrations of a giant oak falling may have been the death knell. Shorty, the Whirling Dervish Handyman, will be taking care of the trees in a mañana fashion.

The hovel was born years ago when I needed an alone place and I wanted somewhere I could sit outside and hear the rain. It began life as Chef Boy ‘R Mine’s clubhouse, but he was unhappy sharing it with wasps and abandoned it. I reclaimed it after it had languished empty and forlorn for years. It is lusciously appointed complete with a copper chandelier and Diego Rivera artwork, but has been left to the wildlife for some years now. It’s going to be a righteous mess to clean up. Maybe this fall. 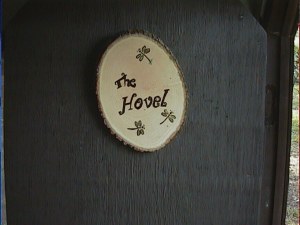 As reality becomes more real and I realize more and more what I can expect, the to-do list becomes frightening. I know I can’t live with this chaos and I know it’s up to me for mitigation. I fervently believe that I must work on “finding contentment in creating chaos” but every area of my life is in flux. And I wonder if I’m to be content with the chaos I create or must I also find peace with that inflicted on me. And if the answer to both is affirmative, do I have to do it at the same time. Are there rules about these things? Probably not – chaos is the absence of rules.

I sometimes hear the echoes of panic.