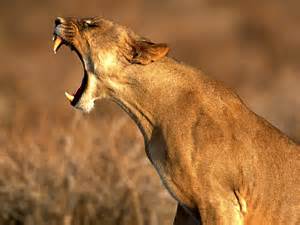 I grew up, as did many folks my age, watching shows like Wild Kingdom and Flipper and Born Free. After years of such fare, I either internalized a phenomenon that I couldn’t articulate until after my son was born or, more likely, I just bore witness to behavior I would acquire on my own.

Said phenomenon was a set of behaviors centered on an attitude. Before Chef Boy ‘R Mine, I attributed the onset of these behaviors and that attitude to any number of things: my sense of justice, PMS, love, exhaustion. After Child-of-Mine’s birth, we coined a phrase to label this state of being, force of nature, whirlwind of 6’ woman with hair on fire. We called it Don’t-Fuck-With-The-Mama.

Think for a moment on every story you’ve ever heard or read about the mama bear, the lioness or the normally sweet-tempered family dog who turned into a wailing banshee of hell’s fury unleashed when the pups, cubs, kittens were endangered.

My child was a medical miracle and his first few months of life involved a lot of doctors and an insurance company who did not understand DFWTM.

I don’t yell. I don’t, generally, curse when confronting the problem. I don’t flail about or commit bodily harm – at least I haven’t yet. But I am either an immovable object or an unstoppable force. I say “unacceptable” a lot.

DFWTM extends to anyone I care deeply about though it is much stronger when my son is involved. Go ahead; ask me about the time I interrupted a board meeting of a health insurance company to question their decision to deny my son a surgeon with actual cleft-lip repair experience? Or the time my son was bullied to the point of blood on a school bus and the driver let him off at the regular stop as if nothing had happened. You’ll not want to ask me about the principal at the local elementary school unless you have a lot of time. It’s probably best that we don’t get into the Unfortunate Incident With My Mom’s Doctor or the ridiculous employment rules that endangered my ex-husband’s life.

I am fiercely protective of who and what I love.

The past months have been DFWTM. This time it’s not my son, but my husband-in-fact-if-not-legally. It’s further indictment of the sad state of healthcare in this country that most of my truly epic DFWTH moments center on medical folks. I have many stories about the wondrous effects medical professionals have wrought. I give praise where it’s due. And I put on storm trooper boots and wage battle when they err. Sometimes the iron fist is velvet-gloved as in the recent statement, “I believe that I must insist you consult with his transplant team before you continue” and other times a tad more confrontational such as the, also recent, “You will not talk to me that way especially when you do not know what you’re talking about.”  But it’s pretty much a given that the shit is about to hit the fan, when I quit dealing with the person responsible for the mess and pick up the phone to involve someone else.

After these events, when I sheathed my talons and the adrenaline has receded, I wonder how it is that some of these folks have habituated these behaviors? Do they not deal with lionesses protecting cubs? Or are the lionesses losing their ferocity? Or are the lionesses submitting to an authority who hasn’t earned the privilege of trust?

Taylor Mali’s quote on authority comes to mind, particularly as I have just written an entire paragraph of questions.

I entreat you, I implore you, I exhort you,
I challenge you: To speak with conviction.
To say what you believe in a manner that bespeaks
the determination with which you believe it.
Because contrary to the wisdom of the bumper sticker,
it is not enough these days to simply QUESTION AUTHORITY.
You have to speak with it, too.

I entreat you to advocate, vigorously, for those you love. Lives depend on it.

4 thoughts on “The Doctor and The Lioness”