This is not the first time I’ve dreaded writing.

This is not the first time I’ve lost someone I loved deeply.

It’s not the first time I’ve lost someone after a long illness.

It is the first time, I’ve lost someone who lived with me and someone this close to me.

I knew through both the information the doctors provided and seeing Doug every day that we were in the end days. In a sense, I began grieving in January when I got called to the ICU to make end-of-life decisions. He was nicknamed Miracle Man long before that episode because he kept surviving that which they thought he wouldn’t. Perhaps it was denial, but in January I thought Miracle Man would make an appearance. And he did.

With strong emotion, I must write. Even with trivial things, I don’t know what I think until I pound a keyboard.

I haven’t wanted to think.

The longer I haven’t thought, the more antsy and ADD and incoherent I’ve gotten.  I put off writing his obituary until I absolutely had to and that kept me together.  It was so important to get it right and polished.  This writing just has to be.  It can be rough and raw, but like his obituary it has to be honest.

No, I’m not going to present the entire brain download here.

The past three years and the illnesses contained within them took the Doug I knew. They took the me I knew too.

Beginning in January, I entered, I think, the anger stage of grief. I was angry with him and with me and with the doctors and with the existence of bone marrow transplants and with the everyday inconveniences of normal life. The little shit really got to me. With everything going on, did we really need a home remodeling project that went to hell? Did we need screwed up direct deposits, car problems, and a broken pipe in the ceiling of the laundry room.  And me, who has always loved the “don’t sweat the small stuff and it’s all small stuff” slogan, despite my inability to keep small stuff from aggravating me.  When it counted, when there was HUGE BIG SHIT going on, the little stuff got to me. 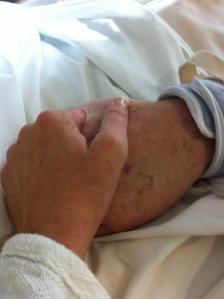 And just when I would be ready to burst into a ball of flaming wrath wreaking havoc on everything around me, he’d end up back in the hospital and my priorities would line up properly again. I so wish I could have kept them lined up all the time. I so wish I could tell him I’m sorry for letting the little shit get in the way.  I wish I could do it over.

But nope. This was the most sustained, external, loud angry episode of my life. It scared me. I’m sure it scared him. I haven’t had any experience with this kind of anger. I was smart about it. I plopped my butt into a therapist’s office and she’s a good one. I was getting a grip on it, getting it under control, finding some balance when all hell broke loose again and we were back in the intensive care unit.

I’m one of those people who are very, very good in a crisis. When the Titanic is sinking, I’m the one you want. It’s not something I have to think about, it just happens. There’s a preternatural calm that descends and I go into information gathering and nurturing mode.

Doug’s final days were as calm and bittersweet as I could shape them. 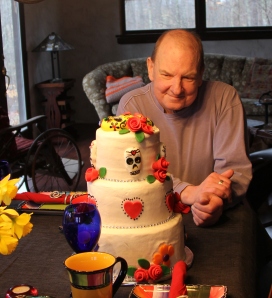 Through it, folks kept asking how I was doing and I would respond with, “Fine.” And I really was. I was in the calm in the center of the storm. I have said for some time that I would not choose to live life the way he was forced to live it. I was ready, for his sake, to let him go. People would impress upon me the necessity of taking care of me, expressing my feelings, and all the other wise advice such a situation requires. I told them I was fine. I also told them I would fall apart when it was all over – well after everyone else was picking up the pieces and getting on with life. I expected that time to arrive later this week or possibly next week.

I’m sure my calm composure puzzled some folks. 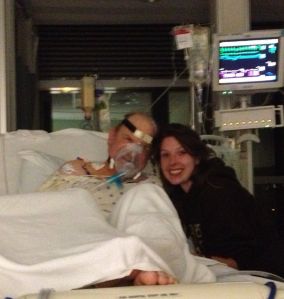 Yesterday, I went to pieces. The catalyst, I think, was trying to choose a birthday card for my father’s 75th birthday. I didn’t have much trouble choosing his card, but it summoned thoughts about the agony Doug’s daughter must have gone through choosing his Father’s Day card.  A task she did on Saturday in full knowledge that his days left were few.

I did manage to get out of the retail establishment I was in (card purchased) and home, before the dam collapsed.

Shortly after Doug’s death, my mother and a good friend came to my house primarily to clean so Doug’s daughter could have a place a little more nurturing to grieve. They also put away the medical equipment, tubing, medications, bandages and all the overt signs of Doug living a life he didn’t want and that nobody who loved him would have wanted for him.  That act of kindness. . .I’ll never have the words to convey my appreciation.

We did leave the motel we’d spent precious little time in and came here.  We had a good time, of sorts.  In the garden and over wine, we talked long into the night, telling stories and talking about anthropology.  We’d talk of funeral plans and estate matters and somehow segue into topics having nothing to do with Doug.  By the time we went to bed, we were friends and we’d made most of the important decisions.

It was good and it was healing, but just as important, Doug would so have loved listening to us ramble like only two talkative women can.  I’ve never spent a lot of time with his daughter and, when I did, I stayed in the background (or tried to) so she and her dad could have time together.  I’ve fallen quite in love with her, the woman he considered his greatest accomplishment.

Also, I’ve had occasion to fall wildly back in love with Doug this past week. Don’t interpret that wrong. I have loved him. I’m talking about that giddy, in-love, hormonal rush that accompanies the beginning of a good relationship.

Grief is personal. It’s been broken into 5 stages and it’s said we all experience all 5 in varying order of varying duration for each stage. Maybe I missed it, but I don’t remember the falling-wildly-in-love one.

Ours was an unconventional love story which I guess could probably go without saying – what with both of us being pretty unconventional people. We were very different in some core respects, but it mostly worked.

I am, really I am, glad that he is no longer struggling with the loss of the kind of  life he wanted to live.  The degradation of his body and his mind caused him great sorrow.

But I am really going to miss him. This is, perhaps, the cruelest form of unrequited love.

Doug and I didn’t have a song. However, my obsession with Clapton bled over into our relationship. He humored me, at times, but then he began embracing some of the songs for himself. One, in particular, astonished him in terms of the effect it had on him.

While he still lived in Boston and before he was diagnosed with leukemia, I had sent him a mixed-cd of songs I liked including Clapton’s River of Tears. He told me later that he’d been driving when he heard it and had to pull over. I don’t know where he was, exactly, but I envision him near the Charles River.

He told me he’d been happy when he popped the cd in. He told me he couldn’t understand the effect of the song upon him, but that he experienced the same effect in varying intensity every time he listened to it. Music routinely messes with my emotions, which is why I’m not listening to anything right now, but he boggled at the effect of that song upon him regardless of his mood. He was not a man to boggle.  He couldn’t really describe the nature of the tears the song provoked other than cathartic.

I’m pretty sure River of Tears is about the death of Clapton’s very young son – a grief I don’t even want to try and imagine. The song used to make me routinely cry.  After repeated hearings, I got to where it just made me reflective and teary.  It often makes me pick up the phone and call my own son who was born roughly about the same time as Clapton’s. I would also, some times, pick up the phone and call Doug. Most of all, I would just listen to it, remember those I had lost, and allow the cathartic effect to remind me that love doesn’t end when a life does or even when a relationship runs its course. The song also reminds me that we do survive the grief and, with effort, can transform it into something beautiful to be shared.

In Doug’s obituary, I wrote, “He loved travel, reading, Mexican food, lobster, a well-told tale, and the anonymous donor that allowed him to live long enough to see his daughter graduate from Notre Dame, beginning her own career in anthropology.”  He also loved me and I’m better for it.

Some of you who love me may read this and grow concerned.  I am not fine.  I am grieving and I’m doing it the way the process has decreed I need to do it.  But I am not a complete mess,  I am not inconsolable.  I’m at the stage most folks were at last Tuesday.  I will be okay.  The outpouring of love, concern, and stories about Doug this past week have and will sustain me.  The fact that I’m wildly in-love with Douglas B. Hanson right now is a very good thing.  (If weird.)