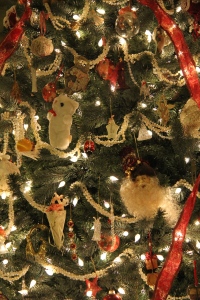 The big tree is finally up and decorated according to tradition. This is always a monumental undertaking, but this year the tree was especially recalcitrant.

The little tree is the kid-friendly one. This one is for me. Some people have scrapbooks – I have a Christmas tree. Every ornament on the tree, though mundane and seemingly uninteresting, has a story even if the story is only that it was on my first tree. Indeed, I procured my first ornament while still in high school. I love Christmas trees and this one is a lifetime of stories. 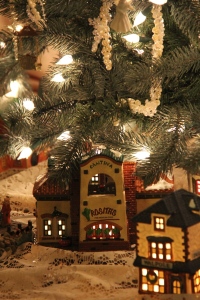 Under the tree sits a Christmas Village consisting of 32 houses, several large accent pieces and a score or two of village residents. I have always put the village under the tree and the population of explosion of a couple years ago has stagnated. This year I added one new structure, Rosita’s Cantina, to honor Doug. But that one little café apparently was more than the town zoning commission could take. No matter how I arranged and re-arranged, everything would not fit and just looked terrible. I was perplexed. 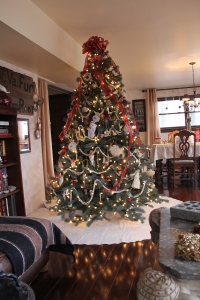 Since I am the Queen of Online Shopping, I ordered a new tree skirt which is, as is usual with me, a tablecloth. This one is a 90” round. I miss the ridiculous lace of the old one, but this has a beautiful damask texture. I’ll get used to it. But, baby, we got room for growth now! Um, actually no. Even though I added a bunch of new real estate, the village barely fits. It would seem the opening of a Mexican cantina is the sign that a town has all it needs. 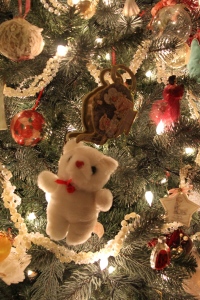 I love the walk down Memory Lane when I decorate the trees. As is probably true for most folks, most of the stories center on my child. My favorite story to tell is why there is a pink baby rattle on the tree, but my second favorite story to tell is the Lazzie Bear Event of 1987. It might have been 1986, but Chef Boy ‘R Mine demonstrated some mad running skills so I’m thinking he must have been 2 ½ at the time.

I had the most well-behaved child on the planet and it had nothing to do with my parenting, he was just a compliant, good-natured kid. So much so that I feared for him. 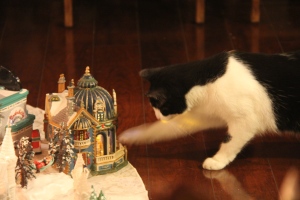 (He grew out of this in his teen years and I quit fearing for him and started fearing for me, because I was losing my mind with his behavior, but those are other stories. Back to the one at hand.)

He and I were in Lazarus, now Macy’s, and the full-on Christmas shopping frenzy was in place at the Huntington Mall. The place was crazy busy. Jeremy held my hand and stayed close without me having to tell him. He overwhelmed in crowds and wanted me to carry him, but I was laden down with too much stuff to comply. I feel strongly about folks dragging little kids around the mall and Jeremy usually did not go with me. I can’t remember why he was with me, but it was out of the ordinary for him to be plunged into the depths of commercial craziness. Neither of us were cranky, but we were both anxious to be done. 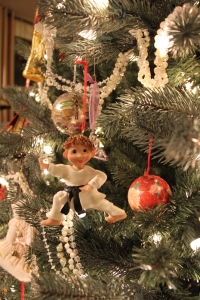 With no warning at all, my compliant, well-behaved child took off at a run through the perfume department, through the jewelry department, hung a right at shoes, and launched himself airborne into the arms of one, very surprised adult wearing a white bear costume.

Lazzie Bear was the store’s mascot and for a price, children could have their photos taken with Lazzie Bear. The child had wanted nothing to do with Santa, but a large white bear trying to go on a bathroom break was the love of his young life. The smile on his face! The exuberant hugs! The myriad of kisses! The perplexity of the poor guy just trying to get to the bathroom and out of a hot suit for a minute or two.

Lazzie Bear doesn’t talk, so a patient clerk tried to explain to my son, who I was desperately trying to get to, that Lazzie Bear needed a time-out and Jeremy would have to wait awhile before he could sit on Lazzie’s lap. Jeremy was hearing none of it, still enveloping the guy in sweet, toddler love. 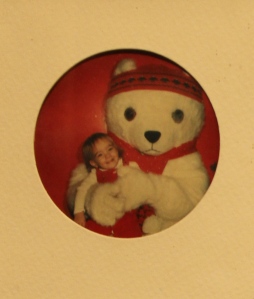 I arrived on the scene, sorted out what was happening, and told Jeremy we had to go a different way to a different place and then he could have his picture made sitting with Lazzie Bear. Well. That was that. He marched me down the aisle, up the escalator, and we patiently waited at the empty Lazzie Bear booth for Lazzie to return. I have a sweet photo to remember the day by and I have a Lazzie Bear hanging on the Big Tree.

I hope you are making stories to tell this holiday season. Enjoy it and the children in your life. These are magical times.