Living without a dog has been like living in a house without a kitchen. It has felt like something important was missing. I could and did function, but it was unsatisfying and the heart of it all seemed to be missing.

I had decided to wait until this spring or summer to get another dog because I want a puppy – a dog that, let’s hope, would be well trained. The timing would have been conducive to house training and, theoretically, the house would have been orderly enough by then to be easy to puppy-proof. A puppy, at least in theory, means I won’t be burying another dog anytime soon. 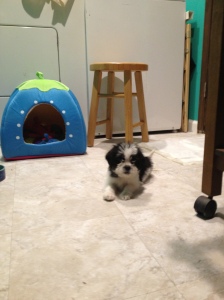 Phoebe 1/22/14 right after bringing her home

After my bad experience with a dog from the local shelter, I just couldn’t go through that again, so I started thinking about what kind of dog I wanted and would want me. I’ve always thought I was a big dog person who had just always been found by small dogs. The two Shih Tzus I had were too sweet for words. The Dachshunds were a hoot and a holler. The Italian Greyhound was a neurotic mess that I loved without reason. And the Golden Lab I fostered for a month or so was pure delight. I started researching breeds.

I read about Huskies and Great Pyrenees, Labradors, Boxers, and Bulldogs. I also read about Dachshunds and Shih Tzus. I kept coming back to the Shih Tzu. For my lifestyle, they seemed perfect. Properly trained, they’re affectionate, lap dogs that live to please and are fairly laid back. I had to be honest and admit I don’t have the proper number of hours in a day to walk and exercise a big dog. I also probably can’t afford to feed a big dog. 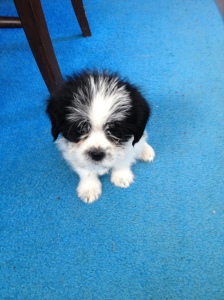 The Beautiful Babette was “mostly Shih Tzu” and she and I suited one another perfectly. As long as she was sitting by me, she was content. She didn’t demand a lot, just my presence.

Even though I was planning on a summer dog, I’ve been cruising Craigslist daily for Shih Tzus. They’ve practically been taking bets at the office for how long it would be before I showed up with one.

Well, the longing for a dog increased and, finally, my preference for a black and white one showed up in the local feed. I was all over it. She’s actually half Shih Tzu and half Maltese which as near as I can figure is a smaller, all-white Shih Tzu. I lost my heart to her almost immediately. I had pretty much planned on naming whatever dog found me Lily, but this one’s name immediately surfaced as Phoebe. It suits her perfectly. There has never been a more Phoebe of a Phoebe.

Puppy love oozes from my every pore. She is a hoot, a holler, and worth every dollar. I brought her home Wednesday night and had cataract surgery first thing Thursday morning. So not only do I have a puppy that delights me, I can see her in high definition! She was born November 14th which makes her about 11 weeks old. The kitchen scales weigh her in at 3.74 lbs. While she is a little bit of nothing, she seems big for her breeding so I’m not sure how big she’s going to get. My preference would be for her to top out at about 8 lbs. I’m so in love with her that if she turns out the size of Great Pyrenees, that’ll be okay too.

I’m not sure why having a dog has been so important, but already everything feels so much more normal than it has in a while. There’s a creature here who misses me when I leave the room. While the cats provide me with a different sort of satisfaction, there’s nothing like being the center of a dog’s universe. So. Meet Phoebe!  [Who, by the way, is sitting under the desk on my foot.  🙂 ]