Today was a commuting adventure. It started when I couldn’t get the car door open for the ice encasing the car. It continued with not being able to get the tires unencased from the ice that was a snowy mud driveway  just yesterday. The adventures accelerated as I did sliding down the hill (shiny side up, headlights more or less forward) in neutral with my foot poised over the break brake (Freudian typo?)  And it all ended with news that even the 4x4s couldn’t get up or down the hill which meant that I wasn’t just walking the hill, which I expected, but that I was walking up by way of the old barn.

The old barn route is longer, but a far more picturesque route – unfortunately all I had with me was the cell phone camera. The evening constitutional was as pleasant as circumstances allowed – the backwoods teeming with deer. The neighbor’s German shepherd kept me company. It was kind of peaceful – pity the windchill kept me from coming in here, grabbing the camera, and returning to that long and winding road.

Some days, walkin' the hill ain't so bad.

[Soundtrack for the post below. I do love me some Eric.]

Every year starting about now, sometimes a few weeks later, I end up having to walk my hill.

I live at the top of a very steep hill. The driveway/road is very long. It’s also dirt and gravel.

Since I live in my own little ecosystem where I get dramatically more snow than the city 12 miles away in which I work, I’m always concerned my co-workers think I’m telling wild stories. Since I do, upon occasion, tell wild stories, I can’t say as I blame them. Perhaps the oddest thing about it is that my wild stories are true. I attract drama and insanity and chaos like the cat’s fur to my wool coat. 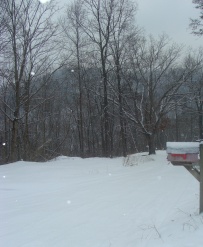 Winter arrived early this year. I’ve been walking the hill for nearly a month. If the weather folk are to be believed, I may still be walking the hill in June. [Editorial comment: I LIKE split infinitives – who makes these damn rules?] I’m already a month into this seasonal aerobic exercise and weight loss regimen and it should just now be starting.

Going down in the morning is not so bad. Walking up in the pitch dark is another story. I religiously carry the cell phone, but as I can’t generally get a signal on the road it really will only serve to allow me to watch the clock to see how long it takes for hypothermia (or blood loss) to kill me. I ponder the wisdom of getting a Lassie – remember how Lassie was always showing up at Timmy’s feet carrying on and him saying, “What is it girl? What?!!!! Farmer John has fallen into the pond and is drowning while we stand here chatting? Let’s go, girl!” [I do need a Lassie. I’ve never had a smart dog. I can’t figure out if I choose slow-learners or if it’s something I do to them.] 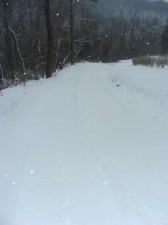 I still have snow pack on the road. In a spot here and there, just this morning, I noticed dirt and gravel peeking out. When the thaw arrives tomorrow, it will begin to melt in earnest and then sunset will come and go, temps will drop down below freezing, and the road will turn into glare ice – a toboggan run of sorts. Tomorrow, I’m apt to slide down the hill on my back – head first.

My dad drives a big old honking Cadillac Escalade. You could house a family of 4 in there and the 4×4 is so powerful he can climb telephone poles in that gas guzzler. Last year, while trying to get up the hill, he got about halfway up, lost traction, and careened backwards all the way down narrowly missing the peon’s cars parked at the bottom –aka those of us without 4x4s. The penchant of 4x4s to not be worth a shit on ice is why I sold my Jeep a decade ago. I find it far less terrifying to walk the road than to slide down it – sideways and sometimes backwards. It made no sense to put up with that kind of mpg and still be walking the hill. [I might be misleading y’all here – I did sell the Jeep for that reason, but lately I’ve been experiencing 4×4 lust – the road has not been icy – with a 4×4, I could have been riding up and down for most of the past month.]

Depending on the melt, nighttime temps and whether or not days are overcast or sunny, the road may become frozen mud which is worse in many respects. It looks like it’s easy enough to traverse, until I get my NASCAR Queen’s car a third of the way up and then have to back it down (usually in the dark with a filthy rear window).

Did I mention it’s a one-lane road?

A couple of years ago, I was walking down the back way which is easier if the snow is really deep or the road is badly iced. It was a nice walk. It wasn’t bone-numbing cold; and it was early enough that my little patch of earth was quiet and peaceful.

With Robert Frost in my head, I arrived at the fork of the road to find a car sitting in – actually in – the fork of a tree growing out of the ravine. Since I’d been reading Stephen King the night before, I imagined all sorts of icky stuff, but the car was empty.  [The transition from Frost to King is as awful as it sounds.]

As it turns out, it was my mailman’s car and it had been there since the day before. I had not noticed it on my way up, because it gets awfully dark in my little patch of earth and because my eyes follow the tiny circle of light the flashlight creates near my feet.

The mailman had a driven up part way before realizing there was no sign that any vehicles had been the down the hill. Foolish guy – he stopped the car, turned it off, got out to better gauge the condition of the hill and watched his car slide over the edge of the road and wedge itself into a tree.

When they did manage to get the car out of there – [can’t you just hear the tow truck driver at his dinner table?] – they found no damage to the car other than some scratches here and there. Had it been my car, it would have been totaled and I would have had to tell the ridiculous story to my insurance company, friends and family, coworkers and all manner of people – all of them rolling their eyes and thinking, “Here she goes again.” Of course, I still get that when I tell the mailman story, but I take comfort in the fact that it wasn’t my car. 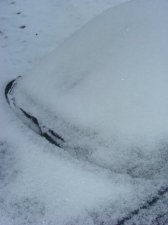 Even with the predicted thaw, I reckon it will be Saturday before I can get up the hill. Already, the weather folk are talking about the next system due in which may or may not be snow. It seems that my driving up the hill like a big girl will be short-lived. Oh, but really, I’m so looking forward to it.