The Great Tibetan Red Saga should be subtitled Disasters in Painting.

I’m afraid of color in the house and it’s my mother’s fault. Mom likes to paint and she likes bright colors.  My childhood was marked by jungle green walls, hot pink table cloths, turquoise carpet and lots of orange. Is it any wonder I’m fond of neutrals.  [She also dyed her hair bizarre colors like peach – bear in mind this was the mid-60s.  I don’t color my hair either.]

When we finally gave in and hired a contractor to finish the barn, we ran out of money long before the barn was done. I told the contractor to paint everything stark white. Yes, white.

The hue and cry was instantaneous and loud. WHITE!!! The contracting crew who had demonstrated a complete lack of aesthetic sense during the entire remodel were all suddenly experts on interior paint colors. White was offensive.  It was as if I had suggested they lop off body parts.

I had walnut trim, doors and pieces of furniture sitting on a pale taupe carpet and, frankly, I thought the white was peaceful and accented the beauty of the wood nicely.

The most frequent question I got was along the lines of “So, when you’re ready to paint what colors are you using?” Ummm, white.  I already painted.  [And now, more than a decade later, it’s time to paint again.  Sigh.]

The only rooms I planned to paint something other than white were the bathrooms and kitchen. The kitchen, primarily, because I had white cabinetry which was fading into the wall and disappearing. I needed a strong color to bring them out. The bathrooms too had a lot of white fixtures and were blah against white walls.

I did paint the bathrooms (venetian plaster in one case) and I was less than pleased.  It seems that if not using white, I have to paint and repaint until I can find a color I can live with.

The master bedroom required two applications of two different colors before I was happy. I am fussy about paint. It’s my mother’s fault.

A few years ago I went on a tear to paint the kitchen a dark red. It was, after all, all the rage and being the trendy person I am. . . After 12 years of dithering, it was time. 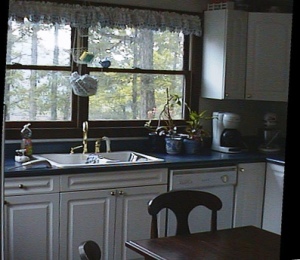 Knowing my problems with color, I grabbed 9,387 paint chips of various reds (yes, there are that many and I didn’t even scratch the surface of available reds). I looked at paint chips in morning light, in evening light, in bright sunshine, against my cabinets, against my countertop. I pondered red paint chips for months.I bored everyone with my endless chatter about red walls in the kitchen.  Finally, even I was tired of my dithering, and I selected, carefully, Tibetan Red.

It was a strong dark red with brown undertones. I can’t stand orange. I couldn’t stomach a red that was even the tiniest bit of orange. Since my countertops are a denim blue, I had to avoid red red less the kitchen began looking like a flag.  I also didn’t want pink red.

I bought 3 gallons. It’s a big kitchen and I was also planning to pain the hallway adjacent to it. HMOKeefe arrived just in time to help paint. We spackled, we sanded, we primed. I was dubious when I looked at the red in the can. It seemed to have a pepto bismol cast. I left for work and he began applying the red.

He called me a few times at work to tell me how fantastic and perfect the red was. How I was going to love it. He was positively chortling with self-satisfied glee.

I arrived home. The red was most decidedly NOT perfect. In early morning light, it took on the hue of orangish adobe. In evening light, it became a magenta. There were a couple hours around noon when it was the color I intended. I don’t spend a lot of time in my kitchen at noon. I was looking at a color on the wall that I hated. It was not what I had wanted.

HMOKeefe, like some demented interior decorator, kept flitting around telling me how wonderful it was and how a third coat would convince me.

The third coat did not convince me. I hated it.  He said it would grow on me.  It didn’t.

Once again, I found myself at the Lowe’s looking at paint chips. I had given up on red. I chose a dark, chocolate brown and painted over 3 coats of Tibetan Red. It was surprisingly easy and I love the brown. Really love it. Nobody else does and I don’t care; they don’t live here.

Lurking in the laundry room was 1 full can and the better part of a second of Tibetan Red languishing unloved and unused. Since I was now on a tear to ready the guest room (having evicted Chef Boy ‘R Mine), I pondered Tibetan Red for that room. One thing led to another and Tibetan Red was indeed the perfect choice. The light and furnishings in that room would play well with the red’s penchant to change color throughout the day.

I began. I washed walls, I spackled (I have a gift for spackling), I sanded, and I applied miles of blue painter tape.

I got out the two cans of Tibetan Red, mixed them together, stirred them well.

I put the first roller of red on the wall.

I put the second roller on the wall – it pulled the first off. Hmmm.

When I stood back, I noticed the edges of the roller marks were turning black. The paint was not drying in a uniform color.

It was a disaster and I had two coats on most of the room.

A friend looked at the pictures and decreed it a crime scene. My mother, the painting expert, said she’d never seen anything like it.

The only solution was to re-prime the walls and start over.

Even when the color is perfect, I hate painting with every fiber of my being. That I have 16 foot ceilings and a lot of trim further contributes to the misery of painting. My back hurts, my arms hurt, and my balance is precarious on ladders.

Nonetheless. Out came the primer.

It wouldn’t stick to the wall. I rolled primer on, pulled the roller back and it all came off.

I went to the Lowe’s and talked to paint people. Nobody had any ideas other than a vague “maybe year old red paint doesn’t apply well.”

I found a forum at iVillage and asked. No ideas other than sanding the red off and starting over.

Sanding. Four walls with 2 coats of red. 16 Foot Ceilings. I wanted to cry.

I did what any rational woman would do. I burst into tears, closed the door and left it for several months.

Finally, I girded my loins and got out the sander.

I sanded. And I sanded. I had red dust in my hair, in my nose, ground into the carpet, and wafting through heating ducts. Eventually, I had it all sanded down to a pale pink.

After sufficient time standing in the parking lot of Lowe’s examining paint chips in bright sunlight, I selected a white with a slight gold undertone. It was not what I had intended for the room and it didn’t set the bed’s canopy aglow as I had wanted, but it was safe and I like it.

I put on two coats. They went on beautifully and covered the remains of the sanded red. As it turned out, the color was a perfect choice – I just wish the canopy was red and I often ponder whether mosquito netting can be dyed. The room has a western exposure and the walls glow at sunset. It’s very nice.

If you’re keeping track, by the time I was finished I had 5 gallons of primer, a gallon and half of Tibetan Red, and 2 coats of Homestead Cameo White on the walls. This was supposed to have been a cheap fix using paint I already owned. Another plan gone awry.

I feel the urge to paint burbling up. Most of the barn still needs new interior paint, but I’m focusing on my study and my downstairs bathroom. The bathroom would be the easiest of the two. I still have PTSD from the Great Tibetan Red Saga and easy would be good. The kicker is I can’t decide between bubble gum pink and grass green. (Long story, there’s a barn/cow motif going on in the bathroom.)
The study is more daunting. I will need to think on that for a good long time. I believe the decision is made – cow bathroom first.
God help me.