As someone who has studied anthropology, I know full well that there are far more than two kinds of people, but if I were to make sweeping generalizations I might suggest that people react to stress by either developing chronic headache problems or developing chronic intestinal problems.

I’ve had a headache I attributed to tripping over the computer cord and cracking my head on the sewing machine 11 days ago. At the time, I felt fortunate at not having to call 911 or an undertaker or my chiropractor or my orthopedist. I was absolutely fine (and grateful to not have had witnesses to my clutziness) until days later when the scab started pulling. There was a blazing headache behind my left eye. I was sure that if I looked in the mirror there would be flames shooting from my ears.

Removing the scab, drinking 4 oz of vodka, and binging on Advil seemed to do the trick. For three days.

Repeat: I am not dying.

I almost never get headaches.

Since I never get them, I have no tolerance and develop a feeling of certitude that I’m dying of something. Excuse me a moment while I put the CDC on speed-dial.

That certitude is not without foundation.

Eleven years ago, on the way to the pediatrician to get Chef Boy ‘R Mine his sports physical, I developed a headache. By the time the doc started yammering at me about height percentiles, immunizations, and puberty, I could barely see for the headache. How I drove home remains a mystery.

By 2 a.m., I was delirious from the headache and puking up internal organs. My head was an orb of pure pain, my back was screaming, and I couldn’t hold my head up to drink water to wash the vomit out of my mouth which was okay because I couldn’t have kept it down. By 1 p.m., I managed to dial the phone and talk long enough to convince the ex to take me to my doctor. Upon arrival at her office it was mere moments before I was wheel-chaired, in great haste, to the E.R. and folks started yammering about brain scans and spinal taps. The only thing I remember with any clarity was telling the E.R doc that I was afraid of the spinal tap. He assured me that it would only hurt for a moment and then all the pain would go away. 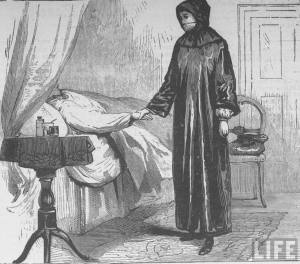 I’m not sure what he gave me, but I was unconscious for three days – the length of time it took to grow a culture and determine that I had viral meningitis. I might be making this up, but I’m pretty sure they told me that I most likely contracted the disease from a mosquito bite.

Unlike bacterial meningitis, there’s no treatment for viral meningitis other than pain meds. It just needs to run its course.

It was a miserable three weeks.

August, I’m told, is the signature month for viral meningitis. With all the rain of the past several months, I have a mosquito problem for the first time ever. They’re everywhere. As soon as I get out of the car, I’m enveloped in a swarm of blood-thirsty proboscii (proboscises?).

This headache bears no resemblance to that one of eleven years ago, but still I’m nervous about those mosquitoes. It was with some relief that I started sneezing this morning. About an hour or so ago, I developed a cough.

I have a cold.

Nonetheless, I’ve still got the CDC on speed dial. 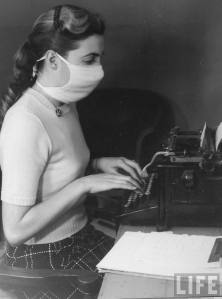 Summer colds suck, but they’re infinitely better than meningitis. So far it’s not affecting my work life (even if I’m using lunch time to blog).

One of my pet peeves is that people won’t stay home when sick – thus infecting everyone else. I don’t have time for a sick day. I’ve put a Quarantined! sign on my office door and warned folks. I’ve sprayed Lysol and I’m mainlining orange juice and aspirin.

So. There are two kinds of people. Those who over-react to statistically-unlikely possibilities and those who don’t.

8 thoughts on “Two Kinds of People”