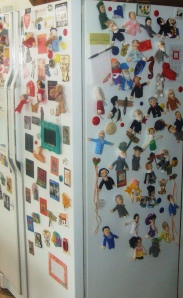 I have a thing for refrigerator magnets. I realize it’s hokey, bourgeois, tacky and a sign of feeble intelligence. But I love them. They make me smile and, sometimes, guffaw. My penchant for excess is clearly apparent by simply looking at my refrigerator. [I was sorely disappointed to learn my dishwasher door was not metal. That’s probably a good thing as I tend to dribble coffee down the door.]

I don’t even pretend they’re utilitarian. I don’t use them to hold notes, children’s artwork, grocery lists, or medical appointment cards. They are there because I like them. Although when Chef Boy ‘R Mine was little, I had alphabet magnets near the bottom so he could play with them. The magnetic poetry is not on the fridge because I like to sprawl on the couch with the nifty magnetic board and compose my pearls of verse. 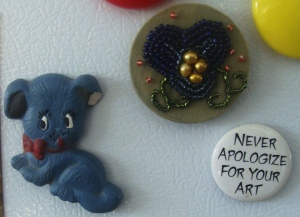 Some magnets I bought as souvenirs and others were gifts. Some my son made and some were made by friends. Many were given to me by HMOKeefe. Some I bought just because I liked them or they spoke to my heart.

When I painted the kitchen several years back I packed them away. For reasons I don’t understand and certainly can’t explain, they’ve languished in the closet all this time. During the holiday housecleaning frenzy it occurred to me while cleaning the surface of the refrigerator that I ought to perambulate my lazy butt over to the closet, fish them out and put them back on the fridge. And so I did.

Among the puppies, quotes, Wizard of Oz characters, tropical fish and goofy photos are the Unemployed Philosopher Guild’s magnetic finger puppets. If you’ve never seen these things you really must meander over to their website. My favorite is Freud and his accompanying couch. But then again I’m uncommonly fond of Frieda Kahlo. Not to mention Schrödinger’s cat and Pavlov’s dog.

My magnets are not confined to the refrigerator. I also have them on my filing cabinet at work. I haven’t added to that display for a few years now. It’s time to remedy that.

As for alternate locations at home, for years, I’ve been trying to find the right sized piece of sheet metal without grooves to cover one side of my antique filing cabinet so the finger puppets can go live there. I’ve explored the possibility of magnetic paint, but I’m not convinced it will hold the heavier magnets and, besides, we all know how I hate painting. [And if you don’t, please understand that I would rather clean the cat box with my tongue than paint. While cleaning the cat box in that manner is never necessary, painting is and the bitching and moaning that occurs is legendary in its intensity.]

I really do have to get the puppets out of the kitchen to protect them from grease and the occasional flying food spatters. And the cat. She likes to pull them off and play kitty soccer with them. I’m a little tired of finding Dorothy Parker under the church pew though I think if she were still alive she would have something really funny to say about lying under a church pew.

Somewhere I have a package of 50 magnets the size of business cards with adhesive on one side. Their reason for being is to turn business cards into fridge magnets. When I bought them I did so because I figured making my own magnets would be a big bunch of fun. I’m going to throw in the towel and just go buy some more. [Lost Things drive me crazy. It doesn’t matter if I want them or not, their status as Lost is a challenge that makes me feel like a failure when frenzied looking is of no avail.]

Frankly, I think we all have some silly thing we collect not because we need them, but because they make us happy. My shoe collection is another, but that deserves a post of its own as do the reading glasses and watches (all of which need new batteries). And of course there are the cow and barn images.

I have a friend who has a display of antique toasters – at least a hundred of them – that are stacked two and three high on the top of his kitchen cabinets. I have an uncle who collects clocks. Every wall in his house is covered in clocks. I believe they number in the hundreds. My brother and his wife have every movie released on video tape or DVD in the last 20 years. My father acquires old computers he works feverishly on to get them running. He does nothing with his successes as most of them are such old technology they are useless. My mother is into glass birds and painted birdhouses – both collections are getting completely out of hand. [I am so dreading dealing with my parents’ house when the time comes – they’re getting close to needing intervention for hoarding.]

So, what is your silly thing? And how to you justify it?