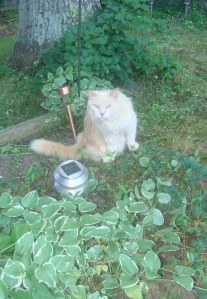 Well, the vinca is doing great!

Well, it’s no Gardenpalooza – more like Gardenpifflefizzle, but it feels good. I finally got Quality Time in the garden this weekend. Quality Time being less than an accurate description. More later.

After having disappeared for so long, it’s a bit difficult to try and figure out where to begin.

In January, HMOKeefe decided to finally consolidate zip codes and he began the process of early retirement. He has some health issues related to a bone marrow transplant for leukemia (CML, to be exact) and the preparation for the move was, um, involved. 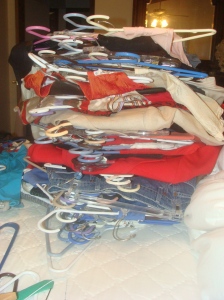 The man really does deserve a closet, but what am I going to do with all this stuff?

Besides trying to find a closet for him to put his togs in, I have been busier than a one-armed paper hanger on a unicycle in a tornado at my job. Frequently during the past few months, I have muttered, declared and yelled, “Hell’s bells, we don’t have to schedule everything for the same time. There are 12 months in the year.

He still doesn’t have a closet.

[Speaking of tornados, boy, do I have a story.]

HMOKeefe has been ensconced in Chez Barn for a little more than a week. Well, sort of.  Following the VERY EVENTFUL move from Massachusetts to West Virginia, I contracted a nasty something that turned into viral pneumonia. At present, I am quarantined and he is staying with my folks. Is it a big ol’ goofy world or what? 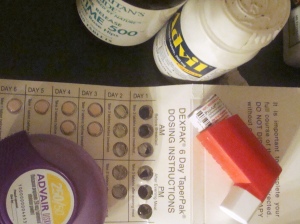 My doctor tut-tutted and reminded me that if I don’t slow myself down, my body will do it for me. And then she prescribed prednisone which winds me up like caffeine-laced cocaine. I’m supposed to be resting, sucking on one of my two inhalers (yes, two!) and drinking lots of fluids.

I still feel like the nasty crud at the bottom of the garbage can, but I’m strangely energized. I’ve restored some order to the house, processed a few loads of laundry, unpacked suitcases from the Massachusetts sojourn as well as those used for attendance at a conference last week.

[Oh, yes, I bring HMOKeefe to West Virginia and then abandon him. And then I arrive home with news that I’m contagious with a nasty and he’s got to go stay elsewhere due to the immune suppressants he takes. He had viral pneumonia years and years and years ago. It took little to persuade him to go stay with people he doesn’t know that well.]

And as if restoring order to the abode wasn’t enough, I summoned the wherewithal to finally mow the backyard. 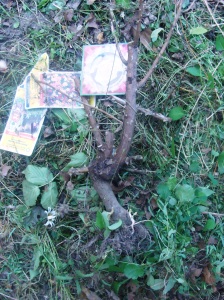 The harsh winter, rainy spring and summer heat has not been kind.

I’ve been so flipping busy and it’s rained every weekend for months, I couldn’t get the lawn mowed. Folks tell me it’s been kind of dry the past couple of weeks, but my yard still squelches when I walk on it. Nonetheless, enough is enough. I tackled the (small) yard with a temperamental lawn mower yesterday. While hacking through the jungle that arose with the wild, wet spring, I hacked, coughed, sneezed and gagged – sometimes all at once.  Viral pneumonia, even tempered with prednisone, is no fun.

Today, I weeded, cleaned up debris and finished chopping up last fall’s leaves with mower.  [I was busy last fall, too.]

The one rose bloom I got to see. Is that pitiful or what?

The garden is in a sad state. We had a late freeze that seriously damaged some of the newer perennials. Then we had nonstop rain. And then we had sudden deluges punctuated with high heat that effectively boiled a bunch of stuff. The stuff that did well – some of the roses, the wisteria, the peonies, the mock orange and the vinca all decided to bloom and blow while I was conducting a move worthy of a David Lynch film.

I feel cheated. But I also feel as if my equanimity is returning. Mucking about in dirt is a very effective antidepressant for me. And gardens do provide immediate gratification at times. After a harsh winter and soggy spring, the before and after of a couple days of prednisone driven frenzy is a sight to behold. 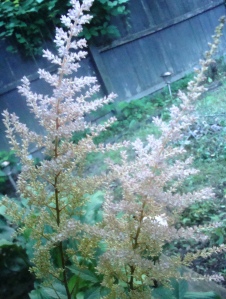 The hostas are happy. But they're always happy.

If you don’t look too close.

The garden is in a state and I’ll be the rest of the season nurturing and repairing damage.  There’s nothing left to bloom, except maybe the peony.  It’s a new one and I can’t tell if it’s bloomed or not.  The buds don’t quite look like buds and might be what’s left after a bloom.  I can’t quite figure it out.

Anyway, I need annuals.  Lots of annuals. Petunias.  Impatiens.  Shasta Daisies.  Morning Glory.  Moonflowers. And some creeping juniper to replace that which died.  And Boston ferns to hang by the door.   Chocolate mint to grace the table.  So much to do. But, damn, it’s good to be back in the garden..

Blogging, too, is an emotional balm for me.  Damn, it’s good to be back. 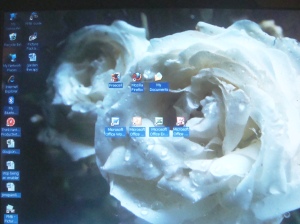 [Did I mention the laptop hard drive crashed spectacularly and I’ve been without the little darling for nearly 4 weeks?  HMOKeefe put in a new hard drive.  I finished loading software and copying backup files and things are almost normal.  Since I don’t have a picture of this spring’s roses, I’m using an older one for my desktop.  Rain on roses seemed a fitting metaphor for the past few months.]

4 thoughts on “Rain on Roses”