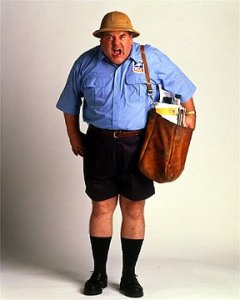 HMO’Keefe gets more mail than any other private citizen in these the United States. I’m convinced of it. 99% are magazines and catalogs. Then there are the book clubs. Never mind that he can no longer read at the speed that he used to. He orders more and more. More and more arrive.

And then there are the medical bills followed up by confirmation from the insurance company. Then the banking and retirement account stuff.

You have to see it to believe it. We need a burro or at least a little red wagon to haul it into the house.

My long-suffering mailman complained. [Not the mailman that ended up in the tree – he retired. The new guy. A nicer guy you’ve never met.]

Under normal circumstances, I get very little mail. It’s been part of my modus operandi to leave the mail in the mailbox until I’m ready to sit down and deal with it. This can be a couple of days or nearly a week. When the mail comes out of the box, everything is immediately dealt with. The bills are paid. Junk mail goes in the trash. Magazines are read or put in designated magazine spot. Insurance statements filed. Yada yada. 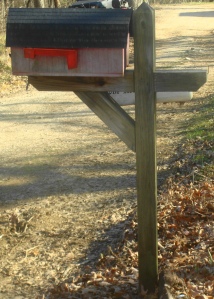 Not as big as it looks. The barn roof makes it look like it holds more than it does.

Leaving it in the mailbox means I know where it is. You might think it a silly way of doing things. It works for me. My bills get paid on time. I don’t have to ransack the house

HMO’Keefe’s deluge of mail (bear in mind there’s another address a few miles away where he also gets mail) is making all of us a bit cranky.

The two of us also shop online a lot. Most of Christmas arrived by UPS, Fed-Ex or the USPS. All three have been delivering packages to my folks and my folks are a wee bit tired of being our mail drop.

There’s also the issue that HMO’Keefe lives for the mail. Or at least acts that way as he watches for the mailman and then bounds out the door to collect the mail which he then brings in and leaves scattered all over the place – not one piece of it thrown away. Not one advertising circular, not one car insurance come-on, not one Cigar Aficionado catalog thrown away despite his not having smoked a thing in nearly 40 years. He opens the envelope, looks at the contents, sets it aside. Wanders to another part of the house, where he opens something else. Rinse and repeat.

For the first time in years, I had mail stacked everywhere. MY MAIL. And then there were the towers of his mail threatening to topple and kills us all. 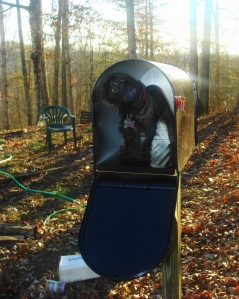 Under the tree was a mailbox large enough to hold a body. The photos don’t do it justice. As Santa maneuvered through Anderson’s General Store in Columbus, folks moved to the side of the aisles to gape in astonishment at the mutant mailbox. One person asked if it was real.

It is. And it’s big enough to hold a week’s worth of mail and a package or two.

I went to Lowe’s to see if there was a pre-made platform available for my mailbox. Nope.

I went back to Lowe’s to see if they could sell me a piece a wood and cut it for me. I never found out because the Lowe’s guy suggested a bracket set-up that looked like it would do the trick a whole lot easier.

I thought about painting the mailbox a garish color, but decided to keep the elegant, understated black. At least until warmer weather.

I took off the old barn mailbox that I’ve hated almost since it was first put up 23 years ago. That actually went pretty easy.

The old mailbox is nestled in a pile of leaves outside the front door. I’m considering doing something with it INSIDE the house. I doubt HMO’Keefe will cotton to removing mail from one mailbox and putting it in another, but I may cogitate some more. If I could have all the mail (sans junk mail, magazines, advertising) in one place, I’d be less of a bitch. 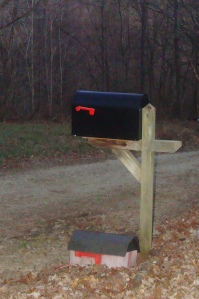 Photo perspective is weird. This thing is HUGE.

I also removed the Herald Dispatch tube. They refused to deliver a paper to me well over 10 years ago. For reasons I don’t understand, there’s been an empty jar in the newspaper tube for years. Every time I thought to remove it, I would stop reaching just in time to avoid the giant wasp nest just inside the opening. January is a good time to destroy a wasp nest.

After removing the old mailbox, it was blatantly obvious the existing mailbox platform was inadequate even with the bracket gizmos.. The new mailbox would bow and bend and, probably, collapse if attached to the Barbie House sized mailbox platform. 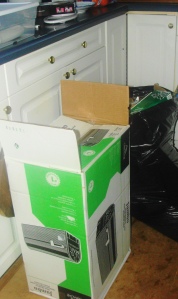 I persuaded my 72-year-old mother to play table saw with me.

After returning with a piece of wood cut to the right size and a power drill, I set to assembly. Other than the fact that I didn’t have the right kind of wood screws, it went well. I put in 4 screws. It’s kind of wobbly, but I have to stop at Lowe’s tomorrow anyway, so I’ll get 4 more screws to fill the empty screw holes and call it done.

Why do I have to stop at Lowe’s? Well everybody knows any project requires no less than 3 trips to Lowe’s. On my second trip, I bought a nifty house number thing that hangs from brackets either from the mailbox or the mailbox post. After opening it and looking at the parts, this thing had 89% chance of utter destruction within a couple of weeks. So back it goes. Along with the bracket gizmos. 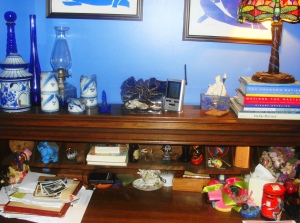 Since I had to tear off the old mailbox, I had to empty it of mail first. After playing with power tools, I came inside and rock’n’rolled through stacks of mail. I found my credit card. I found all sorts of stuff. I threw tons of stuff away. I have a large, heavy-duty black garbage bag nearly full with mail that has accumulated since Thanksgiving. The mail to be dealt with is down to a short-stack.

My mailman better smile tomorrow. I told him a new mailbox was coming.