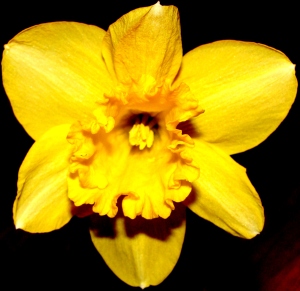 in time of all sweet things

Since West Virginians have just been deemed the unhappiest people in the United States by a bunch of flatlanders with a questionable methodology, [see Buzzardbilly’s excellent commentary and rant about the Forbes article here.] I feel like a traitor admitting to anything less than sheer giddiness, but it’s been a long winter.

As my favorite weather guy will tell you, we’ve had significant cold, ice, wind, sleet, cold, plagues, mayhem, cold, heating bills and cold that started early and is likely to go on for awhile yet. If I remember right, if we see even flurries in April we will have had seven consecutive months of such nonsense which will be some kind of record or near record or something we haven’t seen in years or some such rot. It’s too depressing to think about, so I’m not.

[Having a favorite weather guy is kind of pitiful. I’ve become one of those people who are hyper-vigilant about the forecast, the office authority on projected precipitation, and way too informed about the effect of barometric pressure on mood. Someone told me this is a sure sign that I am now an old woman. Like that’s a news flash.]

The good news that has provoked some gleeful girlish giddiness is that we’ve had a lovely period of faux spring.

It couldn’t have come a moment too soon. Just when I was getting ready to adopt a bunch of feral cats, move into my bed permanently, and, otherwise, settle into extreme (even for me) eccentricity, we got a taste of spring.   I knew it was a false start and I knew there was more cold to come, but I had tangible proof that we weren’t locked into this miserable weather pattern forever.

By Saturday, I was in the yard recording my wind chimes (see extreme eccentricity statement above) and by Tuesday I was dining al fresco in short sleeves at a new Italian restaurant. The respite from listening to the furnace kick on and off and hearing ka-ching wasn’t the only benefit. My vitamin D levels are restored, my equanimity is less unbalanced, and I even sung along to the radio.

I’m not being trite when I say, “Hope springs eternal.” I’m making a bad pun which is no less egregious, but I’ve had a bad winter – cut me some slack.   It’s been a right horrible winter after a right horrible couple of years and spring is the most hopeful time of year.  [November 4th was epic, but it was epic because it was unusual.  Spring happens year after year even if we’re convinced we’re trapped in Narnia and the evil queen is in power.]

But best of all, my daffodils are blooming.

I spotted shoots in Huntington a few weeks back and the 2009 Hyper-Vigilant Daffodil Watch began. It’s always been true that I am two weeks behind Huntington for spring blooming and greening. After a week or so, I trundled out to the travesty that I call a garden and, sure enough, there were sprouts. (And great rejoicing echoed in the holler.) I’ve checked them compulsively ever since.

I do this year after year. The first one acquired the first bud on Saturday. Every year, a few will develop buds and then torture me for weeks before blooming. Then like a symphonic finale, the others will bloom in a crescendo and it’s all over and done with just in time for the Oh-My-God-Would-You-Look-At-The-Redbud-This-Year Season which imperils my car insurance rates and ensures a tardy arrival at the office since I frequently miss my exit for gaping at lavender dotted hills.

Wednesday, I had to run a business errand in Huntington. I drove from the office, past Ritter Park, and through a lovely residential section while rocking out to the radio. The trip to my destination was otherwise uneventful. On the return trip forty minutes later (after an unplanned excursion through an unfamiliar part of Cabell County accounted for by my abysmal spatial skills), I retraced the first part of my journey only to discover blooming magnolias, forsythia and daffodils. DAFFODILS!

Had I plunked my butt down on a bench in Ritter Park for that 40 minutes, I could have watched it happened. (Although whiny, I am a dedicated employee, besides I am not psychic – otherwise I would have certainly been sprawled on a park bench.) I set my watch, marked my calendar, and began planning for my daffodils blooms. Two weeks…check…

Much to my shock, one day later I found daffodils blooming in my yard. Only two of them, but it didn’t take two weeks and two is better than none and THE DAFFODILS ARE BLOOMING. I flitted around the garden like a deranged paparazzo taking pictures and ripping my clothes on wild rose gone wild. I was quite happy (but did Forbes call me? Noooooooooooooooooo).

Having grown up in the tropics, I was 15 before I saw a daffodil. I thought they were pretty spiffy, but it wasn’t until I was an adult (in the legal sense) in Milwaukee, that I saw them blooming in the snow. Great Aunt Gertrude’s Girdle!  What a marvel that is to see.  My love affair with daffodils officially began.

After I’d lived in the barn for a few years, I bought a bag of 150 daffodils and planted them. I didn’t know they multiplied.

They were so crowded that I thinned them two years ago, but like many of my projects I never got around to planting the ones I removed. So, while my daffodils are greatly reduced in number, the blooms this year are spectacular.

The first bloom always summons e. e. cummings to the talk radio show in my head. 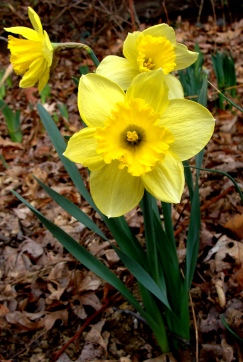 in time of daffodils (who know
the goal of living is to grow)
forgetting why, remember how

in time of lilacs who proclaim
the aim of waking is to dream,
remember so (forgetting seem)

in time of roses (who amaze
our now and here with paradise)
forgetting if, remember yes

in time of all sweet things beyond
whatever mind may comprehend,
remember seek (forgetting find)

and in a mystery to be
(when time from time shall set us free)
forgetting me, remember me

Bolstered by a taste of warm weather and blooming daffodils that will be even more spectacular if wrapped in snow, I am not the least bit distressed by tonight’s forecast for cold and an inch or two of the white stuff. I’m not happy that the furnace is ka-chinging, but I am happy. The daffodils are blooming and all is right with my world – the goal of living is to grow. . . forgetting me, remember me.